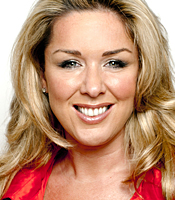 In Spring 2001 we all fell in love with Claire Sweeney... Her natural enthusiasm, humour and zest for life had us all addicted to Celebrity Big Brother. She entered the house as a Brookside regular with a budding acting career. She left the house as the nation's sweetheart. A star was born.

Since then Claire Sweeney has continued to dominate the national consciousness. From an acclaimed starring role in the West End production of 'Chicago', to the presenter of ITV's Saturday Night show 'Challenge of a Lifetime' to a successful debut album entitled 'Claire' culminating in the ultimate accolade 'This Is Your Life'.

After gaining invaluable experience working on cruise ships as a leading singer/actress for P&O, Claire won the part of Lindsey Corkhill in Brookside. For six years, she played one of the show's leading characters and is featured on three full-length videos.

After Brookside and Celebrity Big Brother, Claire has been involved with a variety of television projects, including the prime-time BBC dramas Clocking Off and Merseybeat. In addition to acting, Claire has also demonstrated her presenting skills on prime time shows such as Challenge of a Lifetime for ITV and Here Comes the Sun for BBC1.

Claire has also presented the daytime shows A Week in the West End for the BBC and Loose Women for ITV.

We had a fantastic weekend and Claire Sweeney was great. She was very accommodating and threw herself right into it. As it was our Year-1 show we needed to make it a spectacle and Claire's presence certainly helped.

Clients often ask about purchasing books for giveaways and delegate packs. Below you’ll find a selection of products by Claire Sweeney. Click the images to view on Amazon's website. For bulk orders, please speak with your Booking Agent.