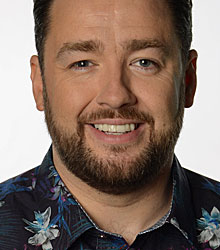 Jason Manford is full of likeable charm and teasingly intelligent wit. Hosting shows like Big Heads, The Olivier Awards and Sunday Night At The Palladium, Jason is a familiar face on television. He has performed stand up sets on Live at the Apollo, Michael McIntyre’s Big Show, made three appearances on The Royal Variety Performance and many others.

Jason started his comedy life as a lowly pot collector at Manchester's long running comedy club, The Buzz. After an act didn't turn up one night, Jason offered to step in and went on to do a very promising set in front of a demanding audience. Then, after only five weeks and four gigs, he won the prestigious North West Comedian of the Year Award, previously won by Caroline Aherne, Johnny Vegas and Peter Kay.

In 2011, Jason was crowned the winner of Born to Shine showcasing his not-so hidden talent of opera singing. He has since starred in the musical Sweeney Todd at the Adelphi Theatre in London's West End, as well as the UK tour of The Producers and as Caractacus Potts in Chitty Chitty Bang Bang. 2017 saw Jason enter the top 10 in the UK charts with his debut album A Different Stage.

Jason has previously hosted a reality comedy competition Show Me The Funny as well as his own comedy variety show, Comedy Rocks. Other television appearances include QI, Big Fat Quiz Of The Year, Never Mind the Buzzcocks, Celebrity Juice, Mastermind and Would I Lie to You?.

Jason Manford is at ease performing stand up comedy, interacting with an audience, awards hosting and presenting.

He has a warm and natural stage presence, and his act is a friendly one. He’s naturally funny and has a strong, original set with wry observations and a genuine respect for the old comedy greats.

Jason Manford's stand up set was fantastic, and his professionalism was outstanding. I cannot thank him enough. His dedication and experiences made this a memorable event, and one that all our guests enjoyed.

Jason Manford has been a friend of Comic Relief since Red Nose Day 2007. Ever generous with his time, he’s appeared on many of our TV shows, from guest judging on Let’s Dance for Comic Relief, tutoring Michael Vaughan in Stand Up for Sport Relief, and even pitched to the Dragon’s in a Sport Relief special. His friendly disposition and effortless humour always goes down a treat and we’re grateful for his continued support

Clients often ask about purchasing books for giveaways and delegate packs. Below you’ll find a selection of products by Jason Manford. Click the images to view on Amazon's website. For bulk orders, please speak with your Booking Agent.

How to book Jason Manford for your event