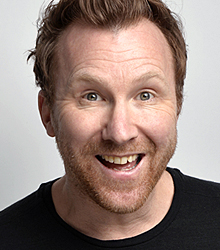 Jason Byrne's inspired, original brand of high-energy lunacy ensures that there is no other comedian presently like him. His fast, free-wheeling style, fused with an array of offbeat props, makes his act a helter-skelter of a show – where the audience are promised the ride of their lives. He has been one of the fastest selling performers at the last 13 Edinburgh Fringe Festivals, where his sell out shows have attracted Best Headliner Chortle Award in 2007, a nomination for 1998 Perrier Newcomer Award, and then a much revered Perrier Award Nomination for his outstanding 2001 show. He was also winner for the 2004 Forth One Fringe Award and continues to play to packed houses throughout Ireland & the UK.

With a growing international profile, Jason Byrne has performed in New York, Boston, Melbourne, Hong Kong, Singapore, Brussels, Milan and Paris and is currently preparing for more national tours around the UK and Ireland.

Jason's debut live DVD Jason Byrne – Out Of The Box was released in 2006, showcasing his unique, inspired and original brand of high-energy lunacy. His most recent DVD is The Byrne Identity which was recorded in 2008.

And what he's best known for... Stand-Up... Jason Byrne has had sell out shows in Melbourne for the past five years and in 2008 he became the first stand up to sell over 25,000 tickets at the Edinburgh Festival.

Jason Byrne has also performed at the Royal Scottish Variety show and BBC1's Live At The Apollo.

Clients often ask about purchasing books for giveaways and delegate packs. Below you’ll find a selection of products by Jason Byrne. Click the images to view on Amazon's website. For bulk orders, please speak with your Booking Agent.

How to book Jason Byrne for your event

Described as ‘the best observational comedian of his generation’

Described as ‘the best observational comedian of his generation’