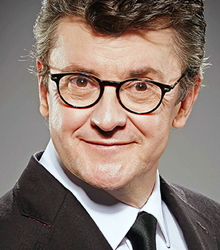 Comedian Joe Pasquale is one of Britain's top live comedy performers, selling out theatres all round the country.

He has continued to delight audiences with his live stand-up tours for over 30 years. Along the way he has voiced characters for Hollywood Movies - Garfield: A Tale of Two Kittens and Horton Hears a Who! As well as Children's animation - Frankenstein's Cat and starred in The Muppet's 25th Anniversary Show.

Joe has appeared in four Royal Variety performances and made numerous television appearances, including his own specials for ITV, recorded three videos - Joe Pasquale, Live & Squeaky, Twin Squeaks and The Crazy World of Joe Pasquale, the first of which sold over 500,000 copies - as well as co-writing The Big Thick Joe Pasquale Book.

Joe made his theatrical debut in 1999 in Larry Shue's The Nerd which prompted Time Out to describe his performance as "rib-shatteringly funny" and went on to appear in the touring productions of Tom Stoppard's Rosencrantz and Guildenstern Are Dead in 2004; Mel Brooks' The Producers in 2007; The Wizard Of Oz in 2010; Doctor In The House with Robert Powell in 2012; Ha Ha Holmes - The Hound Of The Baskervilles in 2013; Spamalot in the West End and on Tour playing the role of 'King Arthur' in 2013-2015 and most recently Joe starred in the lead role of 'Frank Spencer' in the touring production of Some Mothers Do 'Ave 'Em in 2018.

Added to this, Joe was crowned King of the Jungle in ITV's I'm A Celebrity Get Me Out Of Here in 2004. He hosted his own ITV Special An Audience With Joe Pasquale; Hosted the long-running television series The Price Is Right for ITV; Starred in ITV's Dancing On Ice in 2013; dangling from the ceiling of the London Palladium(!) in 2016 and 2017 for ITV's Live From The London Palladium; Taken part in ITV's Sugar Free Farm; Appeared on Five Royal Variety Performances and most recently, took part in ITV's The All New Monty: Who Bares Wins' for Stand Up To Cancer.

Having qualified as a pilot and taken up boxing and running, Joe has continued to enhance his 'Action Man' credentials by competing in a celebrity edition of Total Wipe Out against the likes of Fatima Whitbread and Sally Gunnell.

He has attempted to smash the most amount of Martial Arts throws in a minute on Guinness World Records Smashed; spent time in a Costa Rican prison for Virgin One's The Prisoner X documentary season and was shipped off to the jungles of Guyana for the Discovery Channel's Alone In The Wild series, where he survived alone with a camera, in the depths of the rainforest for 5 days.

How to book Joe Pasquale for your event