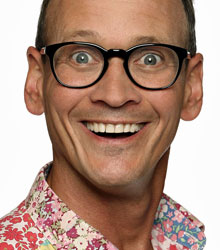 A finalist on ITV's Britain's Got Talent 2020, Steve Royle is a fantastic comedian and juggler who’s been entertaining audiences for over 30 years.

It was whilst studying history at University, that he broke the boredom of revision by juggling three oranges. This led to training in circus skills, and onto work as a juggler, welcoming visitors to the Granada Studios Tour, and as a court jester with his own juggling shows at Camelot theme park.

Despite being a highly skilled juggler, Steve never forgets the comedy, and has a highly honed arsenal of one liners and routines suitable for any audience.

Steve has been warming up audiences in theatres and TV studios for years, including The Royal Variety Show 2006, Sunday Night at The Palladium, 'A Question Of Sport', 'Stars In Their Eyes', 'The Rob Brydon Show', 'Mastermind' and 'The Price is Right'.

He landed a role in Peter Kay’s cult TV series Phoenix Nights after meeting Peter whilst working on the stand-up circuit. He's known by fans of the TV comedy as 'the bad juggler' who auditioned to perform at The Phoenix Club. Other TV credits include ‘Max and Paddy’s Road To Nowhere’, ‘Peter Kay’s Britain’s Got The Pop Factor’, ‘Stand-up Britain’, ‘Give Your Mate A Break’, ‘The Afternoon Show’ and ‘Talk Of The North’.

In 2015, Steve performed 16 nights at The Manchester Arena, to 200,000 people as part of the 'Phoenix Nights Live' show, alongside Peter Kay and Dave Spikey, helping to raise over £5 million for Comic Relief in the process.

Steve is a headline act at The Comedy Store in London and Manchester, as well as a regular on the UK comedy circuit.

Steve Royle regularly performs at private and corporate events the length and breadth of the country, and is a breath of fresh air on stage; always entertaining, providing huge laughs with his family-friendly routines.

He is a smash-hit at weddings and parties, especially now his profile is higher than ever.

I nearly pushed my golden buzzer for you when I saw your audition because it's one of the funniest performances I've seen. I was totally wowed.

The act that reduced me to tears of joy and sadness and everything and had me in hysterics is you, Steve, I just loveyou.

How to book Steve Royle for your event