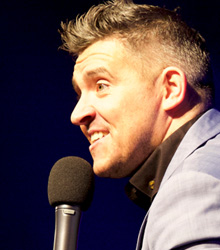 Beginning training from a young age and trained in tap, ballet, modern, jazz and ballroom, Ricky has always been a natural performer. He was also involved in many professional theatre productions including Oliver and Great Expectations at the Lyceum Theatre, Sheffield. This lead to television credits such as co-presenting with Philipa Forester for CBBC’s Broom Cupboard.

Ricky then moved into the world of variety entertainment becoming a Butlin’s Redcoat. Here, his talent shone through and he was quickly recognised as an accomplished all-round entertainer.

Ricky was soon headhunted by Premiere International, who flew him out to Europe to perform as a vocalist and dancer in 5* hotels. During his time away, he began creating a one man show and interjected his own brand of comedy into the performance. On Ricky’s return to the UK he began touring up and down the country performing the show. This led to him being asked to perform at the Horseshoe Bar in Blackpool for The Command Awards. Here he was presented with Best all round act.

In 2014, Ricky reached the live semi-finals of Britain’s Got Talent with his routine ‘The Fairytale Of Love” which received a massive positive global response and over 8 million views on YouTube.

Ricky K has had the pleasure of performing at many private parties and corporate functions including clients such as Orange, O2, DFS and Hilton to name a few.

He also performs regularly for leading travel companies including Thomson, First Choice, Sensatori, P&O, and Royal Caribbean. He is a regular host and compere for UK holiday parks including Pontin’s and Haven.

How to book Ricky K for your event