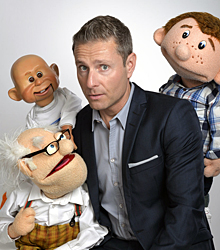 South London-born ventriloquist and comedian Paul Zerdin has over 20 years experience as a performer, which was evident when he stole the show in his third Royal Variety Performance in the in the presence of HRH the Prince of Wales, and then in 2015 became the first British winner of America's Got Talent.

When Paul was 10, a family friend made him a puppet theatre which he used to put on shows. As he is the first to admit, his hobby quickly grew into an obsession. However, the real turning point was when he was given a book on ventriloquism by the legendary Ray Alan. By the time Paul hit his teens he was spending half an hour a day in front of the mirror practising talking without moving his lips.

Having failed his GCSE's in spectacular style, Paul Zerdin got a job in a magic shop, developing his magic skills along the way. Simultaneously, he was also developing a sideline as a children's entertainer. Compared to his friends and their paper rounds, he was raking it in!

Paul Zerdin made his TV debut as a magician on the BBC's Tricky Business and shortly afterwards, at the age of just 20, landed a two year contract presenting the Disney produced kids' programme Rise and Shine for GMTV. In 1996, Paul was the first outright winner – by over 100,000 votes – of LWT's The Big Big Talent Show, hosted by Jonathan Ross. The experience not only raised his profile, but introduced him to Nigel Lythgoe, the man who would go on to create reality shows such as Popstars and American Idol.

Lythgoe took the 22 year old Paul under his wing, paving the way for appearances on scores of shows, Tonight at the London Palladium, and Generation Game among them. It was Nigel who gave Paul Zerdin his first brush with Royalty when he secured him a spot on the Prince's Trust Gala Show in 1997.

By the late nineties and early noughties it was obvious that traditional variety shows were losing their appeal and it was then that Paul Zerdin decided to introduce stand-up into his routine, a decision that has paid off handsomely. From Ray Alan through to Keith Harris and Ronn Lucas, ventriloquists have been a staple of international entertainment for years, but it has taken Paul Zerdin to bring his mix of stand-up and ventriloquism to the forefront of contemporary entertainment to truly put ventriloquism on the comedy map.

In 2015, Paul Zerdin was one of 3 British acts to appear on America's Got Talent and, receiving a Golden Buzzer early on, stormed his way through the rounds to became the outright winner in the live final at Radio City in New York.

Technically immaculate, it's what he does with his slick talent that really sets him apart. His relationship with the characters has all the dramatic tension of a real life double act.

Clients often ask about purchasing books for giveaways and delegate packs. Below you’ll find a selection of products by Paul Zerdin. Click the images to view on Amazon's website. For bulk orders, please speak with your Booking Agent.

How to book Paul Zerdin for your event