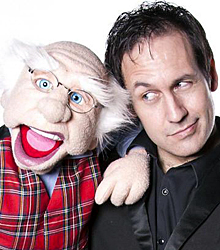 Steve Hewlett had been performing his highly polished ventriloquist act for 15 years before appearing in front of the Britain's Got Talent judges in 2013, and getting through to the live semi-finals.

In 1987, a teenage Steve saw the then-popular ITV talent show New Faces, which launched many stars of the era including Joe Pasquale, Victoria Wood and Lenny Henry. One of the acts on that year's show was a ventriloquist by the name of Jimmy Tamley. Steve loved the act so much he decided that's what he wanted to do. He discovered that Jimmy Tamley lived round the corner from him, so he knocked on his door and asked for lessons. Steve became Jimmy's ‘shadow' for many years and eventually toured the UK with him.

Steve then went on to appear on follow-up TV talent show The Big Big Talent Show (ITV, 1997) hosted by Jonathan Ross, and which featured as a contestant, none other than Britain's Got More Talent presenter, Stephen Mulhern. Between the ages of 18-22 Steve entered many talent competitions around the country in various pubs and clubs. One of the competitions was in Bournemouth in 1997, Amanda Holden was one of the judges and he came first in the competition!

Steve Hewlett continues to entertain the corporate and comedy club markets and is adaptable to all audiences, venues and events both within the UK and Internationally.