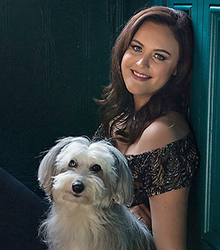 Ashleigh Butler shot to fame in 2012 when appearing alongside her dog Pudsey on Britain’s Got Talent. After their first audition Simon Cowell declared “This is what I've been waiting for all my life. You are one of my favourite ever acts”, and their breathtaking dance numbers impressed so much that they went on to win!

After winning the show, Simon Cowell flew them in his private jet to Hollywood and New York where they appeared on The Tonight Show with Jay Leno, America's Got Talent, Access Hollywood, Extra with Terri Seymour, Good Morning America and E! News amongst others. The duo was also invited to perform for the Queen twice. First, at the Epsom Derby in front of a 100,000 strong audience, as well as alongside the best of British acts, in front of Her Majesty for the infamous Royal Variety Show in November 2012.

Shortly after, Pudsey added another title to his impressive CV as a Pawthor. His autobi-dog-raphy hit the bookshelves in October 2012 and sold out within 3 days, telling the story about his life leading up to Britain's Got Talent. A different version of the book “A Pup Story” was also released in April 2013 for the younger fans and was accompanied by a book tour across the country.

TV opportunities continued to flood in fast. Their filming schedule was non stop, with Tog Dog Model, Super Famous Animals, CBBC Who Let the Dogs Out & About, Red or Black and Pet School in the can. Ashleigh also got her first presenting role on the CBBC series, Who Let the Dogs Out in Autumn 2012.

Their success didn't stop there. Pudsey released his own calendar in Dec 2012 starring the VIP – Very Important Pooch. They also starred in the pantomime, Dick Whittington in Woking, which saw the theatre break a record in ticket sales. Their popularity saw them return the following year to Manchester and then Bristol in December 2014.

In May 2013, Ashleigh & Pudsey attended the Cannes Film Festival, rubbing shoulders with Hollywood stars Leonardo Di Caprio and Nicole Kidman. They promoted their feature film Pudsey – the Movie, which put Pudsey on the same path as Lassie. The movie hit the cinemas in July 2014 and is a new collaboration between Vertigo Films and Simon Cowell. Pudsey was even voiced by comedian and BGT judge, David Walliams!

Sadly, in July 2017 Pudsey passed away. His best friend Sully, who had also been trained by Ashleigh, found it was now his time to shine, and took over future events with Ashleigh. With Ashleigh’s unique choreography and Sully’s adorable style, their act is not to be missed.

Since winning Britain’s Got Talent in 2012, Ashleigh & Pudsey proved to be one of the show’s most popular acts for corporate, public and private events, and became highly sought-after all over the UK.

Sadly, Pudsey passed away in 2017, however his best friend Sully, also trained by Ashleigh, took over his engagements and, with Ashleigh’s unique choreography and Sully’s adorable style, their act remains one that’s not to be missed.

They will generally perform a couple of 4-5 minute routines plus meet and greet with the guests. NOTE: Sully is not able to perform for long periods of time and needs recuperation between each routine, so their performances are not as lengthy as their human only counterparts!

Clients often ask about purchasing books for giveaways and delegate packs. Below you’ll find a selection of products by Ashleigh Butler & Sully. Click the images to view on Amazon's website. For bulk orders, please speak with your Booking Agent.

How to book Ashleigh Butler & Sully for your event