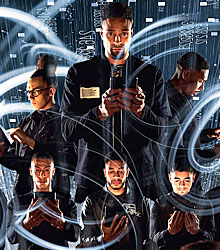 Book Diversity
add to shortlist
About

Spurred on by the group's motto "Dream, Believe, Achieve", Diversity are a remarkable example of what can be accomplished with hard work, dedication and belief.

Since winning the third series of Britain's Got Talent in 2009, Diversity have won numerous awards, been the first act to perform outside No. 10 Downing Street in front of the Prime Minister and have sold out three UK & Ireland tours including “Diversity's: Bringing A Toy Story To Life” and “Digitised – Trapped In The Game”.

Previous Diversity tours have seen them travelling the length of the country performing for their legion of devoted fans, and delivering exceptional entertainment with standout reviews. Normally incorporating several genres of music from classical to hip-hop, their diverse eye-catching routines won the hearts of the nation. So far they've performed live to over 1 million people across the world.

Founder, creator and the inspiration behind Diversity, Ashley Banjo, has gone on to forge a hugely successful career in his own right as a presenter and judge on numerous shows including Dancing on Ice (ITV1), Got To Dance (Sky 1), Ashley Banjo's Secret Street Crew (Sky 1) and Dance, Dance, Dance (ITV).

Diversity is the only dance group ever to sell-out the 02 Arena and they have appeared numerous times on television including The Royal Variety Show (2009, 2013, 2016), Children in Need (BBC1), Miss World Competition (2011), Pride of Britain, Television BAFTAs (2010) and have performed as guests on numerous Got Talent finals around the world.

Diversity have also headlined numerous festivals and live events including Wireless Festival (2009), T4’s On The Beach (2009), MOBO Awards (2009), 70th anniversary concert for the VE Day celebrations (2015), Closing concert for the Invictus Games 2014 and they continue to perform live at a number of music festivals throughout the UK including Party in the Park, Isle of White Festival, Jersey Festival and many more.

After winning Britain’s Got Talent Ashley Banjo and Diversity were signed exclusively to SKY TV for 2 years. Ashley Banjo was a judge on Sky 1’s Got To Dance series 1, 2, 3, 4 & 5 and Diversity performed show-stopping routines live on all 5 series. Ashley went on to co-create “Ashley Banjo’s Secret Street Crew” series 1, 2 and 3 which again featured performances and mentoring from all of the Diversity members.
Taking the concept of secret street crew to another level Ashley Banjo’s Big Town Dance was created in 2014. This saw Ashley and Diversity teach the town of Stockton to dance, but in doing so bringing the whole community together and breathing new life and excitement into the town and culminating in a massive dance flashmob. In January 2015 Diversity performed a live hour long entertainment special on prime time ITV titled “Diversity Live”.

From grand corporate dinners and award ceremonies to intimate private parties, Diversity have performed at literally hundreds of events spanning 25 countries, where they always astound, amaze, excite and never fail to inspire.

Diversity are positive role models for young people and continue to inspire all generations. Their popularity is as strong as ever and their legion of dedicated fans and the UK public continue to support them every step of the way. They live by their moto “Dream, Believe, Achieve” and are a remarkable example of what can be accomplished with dedication, belief and hard work.

To book Diversity for a live performance at your next event please call one of our agents to discuss your requirements.

...thank you too personally, for helping to make it all possible. We weren’t exactly expecting to embarrass ourselves looking like a pair of middle aged twits behind the boys - but anything to make the guests smile - and you never think you are as old as you are! Altogether - they all made it an unforgettable evening and one that every single person enjoyed from my parents in their seventies and eighties, to the youngsters in their teens and twenties. Diversity were all consummate professionals who clearly spend a great deal of time and effort ensuring that their performances are to the very highest standard - Diversity are still up there as one of the best performance acts in any genre because their attention to detail, timing and skill-set is superb. More to the point - they are all delightful people and we thoroughly enjoyed having them in our home.

Clients often ask about purchasing books for giveaways and delegate packs. Below you’ll find a selection of products by Diversity. Click the images to view on Amazon's website. For bulk orders, please speak with your Booking Agent.

How to book Diversity for your event