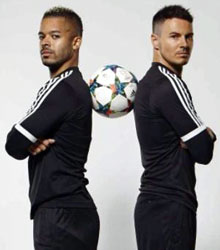 Book The F2 Football Freestylers
add to shortlist
About

Having opened the show at the World FIFA Ballon D'or, former semi-professional footballers Billy Wingrove and Jeremy Lynch knew that they had something unique. In 2011, two of the best in their field came together to officially form The F2 Freestylers and launch their YouTube channel.

Fast forward a decade and they’re now phenomenally successful, amassing over one billion views across over 70 countries and firmly cementing themselves as the leading football influencers in the world — working daily alongside sporting stars and legends.

Billy & Jeremy spend hours each day perfecting choreographed routines to make sure that no matter who watches, everyone will be amazed and, as a result, they’ve now built up a global reputation on social media with 13+ million YouTube subscribers and over 30 million subscribers across all their social channels.

When founded, The F2 was a groundbreaking concept created by these two football experts which never fails to excite, amaze and at times completely baffle audiences. With an ingenious blend of technical difficulty, stunning synchronisation, brilliant choreography and showmanship, the F2 design and choreograph the best football trickery in the world!

They have featured in several charity football events, including Soccer Aid in 2018, where Lynch scored for the England side and in 2019 in which Lynch scored twice, again for England.

During the 2020 COVID-19 pandemic, as ambassadors for Santander UK, The F2 produced a series of videos designed to improve numeracy and increase physical activity in line with UK curriculums for students unable to attend school during lockdown. Previous brand sponsorship deals include Adidas and Carlsberg

Billy Wingrove
Billy is one of the most experienced football freestylers in the world. Starting professionally in 2003, Billy has experienced almost every avenue within freestyle including live performances at the World Cup in front of 300,000 people, being the first freestyler to be signed to a professional Football Club (Tottenham Hotspur FC), holding 3 Guinness world records within Football Freestyle, being the first freestyler to have a tutorial DVD, choreographing adverts with the likes of Messi, Ronaldo, Torres, Del Piero & the whole Manchester United squad.

Billy has brought awareness to football freestyle throughout the world gaining millions of hits on YouTube. In the perfect partnership with Jeremy Lynch, Billy brings a wealth of experience, professionalism and knowledge to The F2 team.

Jeremy Lynch
After being inspired by watching a Nike commercial in 2000 with Edgar Davids and Denilson, Jeremy started doing tricks and it took him around the world. He was one of the stars in the biggest UK documentary of all time "In the Hands of the gods". He won the hearts of the nation when he was a finalist on Britain’s Got Talent, way back in 2008.

Together with Billy, he has become a YouTube phenomenon and social media influencer with videos racking up millions of hits. He has filmed videos with the likes of Christiano Ronaldo, Robinho and Nani, and worked with some of the worlds best players including Cesc Fabregas, Ronaldinho, Robin Van Persie, Drogba, Samir Nasri, Theo Walcott and Wayne Rooney to name a few!

The F2 are genius.

The F2 are the future.

The F2 are unbelievable – what they do is not possible!

How are The F2 not playing in The Premier League.

The F2 United boys were great - everyone loved them, and were all very impressed. They were lovely people and were sociable and amiable. It was a genuine pleasure to have them with us.

How to book The F2 Football Freestylers for your event

Tags for The F2 Football Freestylers