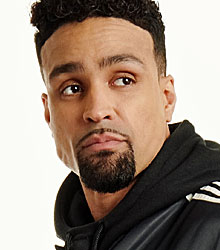 Choreographer, dancer and now an established television presenter, Ashley Banjo exploded onto our TV screens in 2009 when the dynamic street dance group he founded, Diversity, won the final of Britain's Got Talent, watched by over 20 million viewers.

Since then he's starred in a blockbuster movie, become a judge on the hit SKY talent show Got To Dance and ITV’s Dancing on Ice, produced the Emmy and BAFTA award-winning The Real Full Monty and guest judged on Britain’s Got Talent.

Since that life-changing pivotal moment on the dance group’s timeline, Ashley has created and produced all of the group’s performances together with all of their sell-out UK tours; entertaining over 1 million people . He has consistently pushed the boundaries of dance and creativity, both on the stage and in Diversity’s numerous television performances.

The name Diversity was chosen by Ashley not only to describe the group's unique style, but because it's a perfect description of their visual appearance of age, ethnicity and what each member brings to the performance. Ashley has managed to capture the true essence of the group with the carefully chosen mix of music and using the strengths of each of the guys.

Ashley Banjo the group's creator, leader and choreographer has been dancing since he was just 5 years old, however it was Ballet dancing that was his first passion. This largely came about as a result of his mother's influence, who was a former dancer with The Royal Ballet. Later in his school years Ashley developed an interest in street dance and after performing solo in a number of events, he and his brother Jordan and nine friends formed a street dance group called Swift Mover. In 2007, they changed their name to Diversity.

Incorporating several genres of music from classical to hip-hop, Diversity's diverse eye-catching routines won the hearts of the nation.

Spurred on by Diversity's motto 'Dream, Believe, Achieve', Ashley Banjo presents a captivating and gripping motivational talk that will delight, motivate and inspire you to believe in yourself and your dreams and to let nothing stop you in pursuit of bringing them to life.

Listening to Ashley speak on stage, audiences are gripped by his passion, focus and single-minded determination to be the absolute best he can be at everything he does.

Ashley Banjo is one of the most genuine, hard working, successful and down-to-earth personalities in show business, and when hearing him speak you’ll immediately understand why.

I wanted to drop you a note to say again: A BIG THANK YOU for joining us at PurpleBeach! Our attendees were truly inspired by you – I am sure you would have seen via Twitter... But the room was buzzing after you left! We hope to stay in touch in future as we do other leadership events in companies...

Please could you pass on this email and our thanks to Ashley Banjo. I was absolutely delighted to welcome him to our school, which was so in keeping with our ethos. His visit was so well received and has given our pupils some very special memories as well as quite a lot of inspiration. In life, who we are and the values and beliefs we hold are far more important in life, and Ashley clearly demonstrated that by every aspect of his visit. It was a privilege and an honour to have him in our school and I hope one day he will come back and visit again. Always welcome.

Clients often ask about purchasing books for giveaways and delegate packs. Below you’ll find a selection of products by Ashley Banjo MBE. Click the images to view on Amazon's website. For bulk orders, please speak with your Booking Agent.

How to book Ashley Banjo MBE for your event