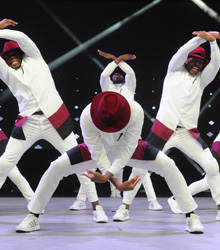 Book Flawless
add to shortlist
About

Dance sensations Flawless, headed by Marlon Wallen, are an inspirational award winning act, that have throughout their historic work always successfully inspired their audiences, both young and old. For more than a decade, Flawless have been turning street dance on its head and not just with all their
upside down spinning.

Flawless have become one of the UK’s hottest and biggest dance acts.
With exceptional versatile technical abilities as well as their charismatic approach and razor sharp sense of style, these guys have helped to revolutionise Street dance. Their trained, sophisticated and mature execution has always enabled them to stand out.

Since starring on Britain’s Got Talent in 2009 to name but a few as well as becoming a household name, Flawless have starred in the number one UK box office hit movies Street Dance 3D 1 & 2, headlined at Buckingham Palace for Queen Elizabeth II including at her Diamond Jubilee Concert, performed for the Opening Ceremony for London 2012 Paralympic Games, heated things up live on the dance floor with BBC’s Strictly Come Dancing professionals, and made history collaborating with the exceptional English National Ballet on tour.

Flawless have also worked with some of the biggest names in the music industry including Madonna, Beyoncé, Rihanna, Kylie Minogue, JLS, Leona Lewis, Emeli Sande and many more to mention. As a premier dance collective with an incredible portfolio Flawless are continuing to Chase The Dream while they encourage, inspire and educate the next generation.

Flawless are best known to the public as contestants of Simon Cowell's Major hit TV show Britain's Got Talent, becoming finalists in 2009 by winning the public vote watched by over 15 million viewers and now have become one of the biggest dance acts in the world.

You will be blown away by the incredible abilities of this dance act!

You make me proud to be British. This was utter perfection

That was utterly electrifying

Clients often ask about purchasing books for giveaways and delegate packs. Below you’ll find a selection of products by Flawless. Click the images to view on Amazon's website. For bulk orders, please speak with your Booking Agent.

How to book Flawless for your event