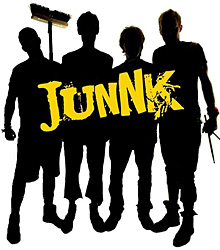 Book JunNk
add to shortlist
About

JunNk is a dynamic, highly talented, award-winning music and comedy group that use a combination of drumming, vocal harmonies, comedy and dance with nothing but ‘rubbish’ as their instruments, to create an utterly explosive live performance that’s fast becoming a massive hit around the world.

From using bottles as panpipes and watering cans as trumpets, to playing well-known tunes on drain pipes with flip flops and a PVC tube as a didjeridoo, this rubbish-powered variety show really is a unique and sensational whirlwind of pure entertainment that should definitely not be missed!

Amongst winning a ‘Spirit of the Fringe’ award at the 2016 Edinburgh Fringe Festival and Event Awards ‘Act of the Year’ title in 2013, JunNk have performed an array of shows for companies around the world, with the show frequently featuring on various Baltic, Mediterranean and Caribbean cruises for Disney, P&O, Royal Caribbean and Celebrity cruise lines, as well as many corporate events, festivals and theatre shows in the UK and abroad.

JunNk perform at corporate functions, private parties, music and arts festivals, and all manner of events within the UK and around the globe.

Whether it’s a 5-minute opener to the show, a full 30-45 minute stage spectacular, or their popular hands-on interactive workshop, JunNk can be completely flexible around your schedule and performance line-up.

How to book JunNk for your event