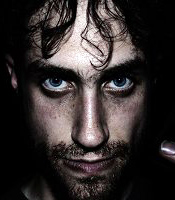 Book Beardyman
add to shortlist
About

Amongst the throng of beatboxers emerging today, there are few like Darren Foreman, better known as Beardyman. A tirelessly innovative performer, Beardyman has always pushed the boundaries of what people expect from human beatbox, merging phenomenal beatbox skills with his left-field sense of humour and incredible musicality.

After winning the well renowned Lyric Pad Beatbox Battle twice in 2004, he went on to win the title of London’s best beatboxer in the 2005 Championships and the following year became UK Beatbox Champion 2006, and then again in 2007.

Beardyman’s first musical venture was composing a symphony for his school orchestra at the age of ten. At fifteen, an introduction to drum ‘n’ bass led to his long-standing obsession with music technology. Now, in his live shows, as well as bafflingly good solo human beatbox, he utilises cutting-edge live looping technology to create dance-inducing layered rhythms, breathtaking soundscapes, fully produced songs and tunes, all improvised and created entirely from the human voice. No pre-recorded material is used, and everything is created live and in real time in front of the audience, who he takes on a mind-bending journey from dumbstruck to dancing and back again.

Beardyman has appeared live with Bill Bailey, Beastie Boys, Chaz and Dave, Blondie and Groove Armada as well as having been seen and heard on Radio 1 and 3, MTV, BBC1's 'When Will I Be Famous' and Lily Allen and Friends. Beardyman has performed at hundreds of festivals such as Just For Laughs, Reading, Leeds, Bestival, Evolution plus Edinburgh Fringe and Montreal Comedy festivals where he incorporates a lot of humour into his shows.

Beardyman was a fun, entertaining finish to the event which linked in with the overall theme and brought the event to a successful conclusion. The audience were (in order) interested, confused, enlightened, amused, entertained.

All round a great show opener. Having been slightly concerned Beardyman might be lost on our middle aged, male audience, he caused quite a sensation.One sponsor summed it up best as "Undoubtedly though, my highlight of the evening was the appearance of Beardyman. When I told my kids, they were beside themselves!

Clients often ask about purchasing books for giveaways and delegate packs. Below you’ll find a selection of products by Beardyman. Click the images to view on Amazon's website. For bulk orders, please speak with your Booking Agent.

How to book Beardyman for your event