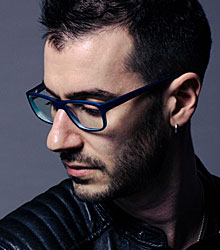 Simon Kahn is an award-winning beatboxer, producer and live looping technologist who performs under the stage name SK Shlomo.

A Guinness World Record breaker, SK Shlomo gave up his astrophysics degree to perform his amazing vocal pyrotechnics. It was a good move. Since then he has won global acclaim and worked with Bjork, Damon Albarn, Martha Wainwright, Basement Jaxx and The Specials. In the process he has continually pushed the boundaries of beatboxing, bringing the art form to new and unexpected audiences.

Raised on a strict childhood diet of orchestral percussion and jazz drums, SK Shlomo instinctively began making vocal music as a small child. He first found critical acclaim as a beatboxer aged 18 when he began touring with the award winning multinational hip hop group Foreign Beggars. Soon after, SK Shlomo was collaborating with Bjork on her all vocal album Medulla.

After appearing on BBC2's Later with Jools Holland, he formed the pioneering beatbox group Shlomo & the Vocal Orchestra and gained international recognition through The Beatbox Choir, a TV documentary following the journey of the group's inception to their sold out debut show.

As well as being an artist in residence at London's Southbank Centre, SK Shlomo is a sought after composer writing for choirs, stage shows, films and adverts. His works include a score for the BFI's restoration of Alfred Hitchcock's Downhill, a commission for the Royal Festival Hall's organ and a nomination for the British Composer Awards for his piece for the National Youth Choir.

SK Shlomo is a firm favourite on the festival scene, bringing out guests like his friend Ed Sheeran (whom he has taught a number of tricks), Lily Allen, Jarvis Cocker and Rudimental. He has played the main stages at Glastonbury more times than he remembers, won rave reviews for his autobiographical one-man shows and even had a feature film made about him.

In addition to live performances, SK Shlomo is also a popular and highly sought-after public speaker on topics including mental health, innovation, technology and creativity.

Keynote Speaking - How Technology is Changing The World
Since winning the World Loopstation Championships at the NAMM conference in LA, SK Shlomo has been in high demand as an authority on technology and creativity.

Motivational Speaking - Mental Health Awareness
In an emotional, inspiring and humbling talk, SK Shlomo encourages talking, sharing and clearing away the stigma attached to men who are suffering feelings of worthlessness, are panicking, or scared about the future.

Performing under his stage name, SK Shlomo, Simon Kahn knows how it feels to be on top of the world. His breathtaking vocal skills gained him early recognition as a world record-breaking beatboxer and world looping champion.

For over a decade, the genre-defying music producer has set new standards for his craft. As Shlomo, he burst in to the mainstream collaborating with Björk and performed with famous fans from Ed Sheeran, Damon Albarn, Lily Allen and Jarvis Cocker to Imogen Heap, Martha Wainwright and Rudimental.

But staying on top becomes increasingly tricky to maintain. Despite the standing ovations and the accolades, Simon would feel oddly empty inside. So, he took a step back to work out what he wanted and his world seemed to crumble under his feet. Like many high-achieving artists, he'd always been incredibly driven, but ultimately that came at the expense of his mental health.

Behind Simon's reinvention lies a realisation – that throughout his 20s, despite composing and producing for other artists, as well as for film and commercials, he had resisted becoming the solo recording artist he desperately wanted to be for fear of failure.

Determined to change, Simon set himself a challenge – to write a song every day for a month. For the first five days, he delivered. Then things ground to a painful halt, triggering a mental breakdown which led to six months in therapy. Diagnosed with PTSD, he was forced to confront his past.

Talking about a major trauma from his childhood was a huge turning point in Simon's life. He named his album Surrender, because that's all the traumatised Simon could ever do - let go and trust. He found it empowering, stopping trying to control everything around him.

None of Simon's achievements in music arrived the traditional way. Appearing on Jools Holland at the start of his career was about the sum of it. He always strived to do everything differently, to create his own path. However, he's realised that the biggest challenge was to stand up on stage and simply be himself.

No clever machines, no fancy techniques, no persona. This was the real Simon, naked so-to-speak. And it was the scariest, most exciting thing he'd ever tried.

Live, Shlomo performs either solo or with his eight-piece vocal group, The Vocal Orchestra. He can also host interactive workshop events.

SK Shlomo has twice held the record for the World's Largest Beatbox Ensemble, the latest being to direct a group of 2,081 Google employees at the Dublin Convention Centre in November 2011.

An inspiring insight into his personal story bookended with jawdropping performances. Everyone in the office is still talking about Shlomo.

SK Shlomo’s energy and skills are mind-blowing. My entire team was laughing, vocalising and interacting with each other throughout the whole day.

A huge success. Everyone was genuinely captivated... thank you sooooo much for doing such an amazing job.

We were thrilled - Shlo is a special guy! We are already looking for ways to work with him again.

Absolutely terrific - he lifted the room, with so much energy and talent. It was such a highlight of WIRED.

Shlomo you were amazing. Thanks for spending time with the staff. We felt a little special hanging out with you.

SK Shlomo was incredibly dynamic, engaging and enlightening, and his interactive presentation had my whole team on their feet.

How to book SK Shlomo for your event