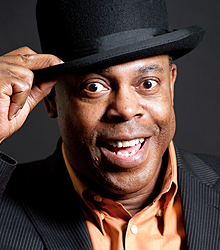 Best known for playing Sergeant “Motor Mouth” Jones in the hugely successful Police Academy films of the 1980s, Michael Winslow is 'The Man of 10,000 Sound Effects', a whirlwind of staggering special effects, astounding sounds and extraordinary noises, his versatility is truly remarkable.

Also seen and heard in the six sequel Police Academy films, Family Guy, The Simpsons and Mel Brooks' Spaceballs, Michael also supplied the voice of Stripe, the evil little creature in the hit movie Gremlins. Michael Winslow is a true Hollywood legend, and his Edinburgh Fringe debut show in 2011 was an unmitigating success that garnered amazing reviews and sold every single seat during his month's run at the prestigious arts festival.

The original vocal artist of the 20th century, Michael can imitate the impossible using only his voice. Whether it's the frenzy of Jimmy Hendrix playing the guitar, the roar of a jet plane or a very special treat for Star Wars fans, he is the master of vocal gymnastics and a truly original comedy star. Michael's beatboxing in the original Police Academy film (1984) pioneered what would become a worldwide craze at the time when break dancing was also becoming popular on the streets.

Born in Washington on Fairchild Air Force Base, Michael Winslow was the youngest of five brothers. His mother often tells stories about when he was a baby she would hear him imitate airplane noises, jet engines, anything that had sound! "Growing up on an Air Force Base made it difficult to have friends, so I created imaginary friends, dogs, cats, trucks, anything that would keep me occupied for the moment." After high school and a brief stint at college, Michael had his first professional performance at a club in Boulder, Colorado named Tulagi's. This was very exciting for him because Jimmy Hendrix, The Doors, Tommy Bolin and other famous bands had played there.

He was an opening act for a group called Nova, an Italian Rock Fusion Band. Through the grapevine he heard they were fans of Hendrix, so why not portray none other than Jimmy Hendrix. He had lots of props including his mother's afro wig he borrowed from her closet. He was quite nervous, but the audience responded to his rendition of Purple Haze with an applause he'll never forget. That moment he knew his calling as an entertainer.

Michael packed his bags and hitchhiked to Venice Beach, California where he auditioned for the Gong Show, hosted by the infamous Chuck Barris, and soon moved on to LA to perform in the local comedy clubs. It was here that he was discovered by Bud Friedman, founder of the renowned New York Improvisation Comedy Club and who, in the past, has launched the careers of the likes of Bette Midler, Andy Kaufman and Jay Leno. Friedman featured Michael in the famous 'Evening at the Improv and in 1984 Michael got his big chance when Hollywood producers Hugh Wilson and Paul Manslanski witnessed his talent. They were overwhelmed by his performance and immediately wrote him into the script of the unforgettable Police Academy movies. The original film was such a success it paved the way for six sequel movies and numerous commercials including Spaceballs, Cheech and Chong, Gremlins, Back to the Future 3, Extra Large... and many more.

Based in Orlando, Florida, Michael Winslow is in huge demand the world over - especially the UK and Europe - for his unique brand of comedy and vocal effects at corporate and private events.

Clients often ask about purchasing books for giveaways and delegate packs. Below you’ll find a selection of products by Michael Winslow. Click the images to view on Amazon's website. For bulk orders, please speak with your Booking Agent.

How to book Michael Winslow for your event