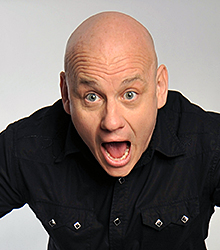 Peeking inside the Technicolor mind of one of Britain's finest comic talents and you will find him desperately doing battle with "The Voices", two unpredictable and hilarious Voices in Terry's Head. Though often a challenge to Terry these two different sides of his ego/conscience often lead him into unpredictable comedy routines. No two shows are ever the same!

Terry Alderton is one of the most exciting comedians around, regularly performing all over the globe. Terry has been Perrier nominated in Edinburgh and won the 3 Weeks Critics award as well as Best International Act at the New Zealand Comedy Festival. This frequent travelling has meant performing alongside some of comedy's biggest stars.

Michael McIntyre has found Terry as a source of inspiration. He has recently worked with Joan Rivers who became an instant fan and Eddie Izzard who proclaimed him to be a 'very funny comic with a fantastic comedy mind', but someone who really ought to seek some sort of professional help.

This is a mainstream act that dares to be different, that comes from the soul... Effortlessly enjoyable yet excitingly different. He deserves a big future.

The moment he steps on stage he delivers a dizzying whirlwind of sharp one-liners, character gags, dead-aim impressions and stunning sound effects... the result is the funniest most thought-provoking, dazzling brilliant comedy you'll see all year.

News of the World

He was sensational, a powerhouse who had the whole audience on their feet at the end. It was inspiring to see a man reduce an audience to tears of laughter.

How to book Terry Alderton for your event