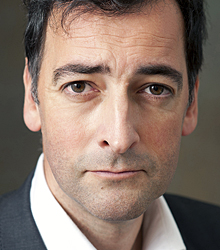 Alistair McGowan has worked in every branch of show-business over the last 30 years, and is one of the busiest after dinner entertainers and awards hosts on the corporate circuit.

He is probably best known for his BAFTA-winning show, The Big Impression alongside Ronni Ancona but he has also acted with the Royal Shakespeare Company and taken lead roles in West End Musicals, including Cabaret and Little Shop of Horrors and in West End plays Art and Pygmalion.

He has sung in and directed several Gilbert and Sullivan productions for Raymond Gubbay and has been a mainstay of countless Radio 4 plays and comedies from Elvenquest to, most recently, Three Pieces In The Shape of A Pear about the life of composer, Erik Satie, which Alistair also wrote.

Alistair was part of the BBC's hugely successful Bleak House and is familiar to younger audiences from CBBC's drama Leonardo.

Alistair McGowan made his Hollywood film debut in Driving Aphrodite and was honoured to be featured on the hugely popular, Who Do You Think You Are? where he discovered his Anglo-Indian roots. Alistair has also been seen as a stand-up comic on Live At The Apollo, hosted ITV's You Cannot Be Serious and has featured on Mock The Week and countless other shows.

Alistair also took part in the first ever gig performed in the UK in French by two English comics when he accepted Eddie Izzard's invitation to support him in Sheffield.

In his home town of Evesham, he indulged his love for and showed his knowledge of football when he interviewed Sir Geoff Hurst for An Evening With Sir Geoff Hurst. He made a number of appearances on television from Countdown to The Daily Politics and from Football Focus to Pointless Celebrities. But the highlight came when he was asked to take part in Bake Off for Comic Relief!

Alistair was fantastic. Everyone loved it. Could not have been a better evening.

Alistair McGowan was fantastic at [the] event. My client would like to book him to host next year's event!

Consensus opinion is that Alastair will be a hard act to follow!

Clients often ask about purchasing books for giveaways and delegate packs. Below you’ll find a selection of products by Alistair McGowan. Click the images to view on Amazon's website. For bulk orders, please speak with your Booking Agent.

How to book Alistair McGowan for your event