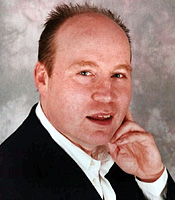 Born in Middlesbrough, Kevin found fame while still at school, mimicking his fellow students and, of course, his teachers. While working as restaurant manager in his brother-in-law's hotel near Thirsk, he would entertain his customers at the end of the evening to a small cameo piece. It was through this venue that someone asked him to speak at the Yorkshire CCC dinner. Engagements rolled in from there and eventually he decided to give up his position in restaurant management to become a professional impressionist.

Kevin Connelly is in great demand for corporate events and sportsmen's dinners and has worked for clients in the UK and Europe including Sanyo, Credit Suisse, The Variety Club, Lloyds TSB, The Institute of Bankers, Sports' Journalists Association, Norwich City Football Club, The Football Association and the Chamber of Commerce.

How to book Kevin Connelly for your event