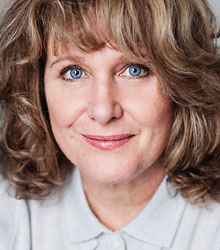 With her unique mix of impressions and satire, Jan Ravens is one of the UK’s most successful impressionists.

Jan is the long running star of BBC's Dead Ringers and latest panelist on ITV’s The Imitation Game. Theresa May, Diane Abbott, Kirsty Wark, Fiona Bruce and Hillary Clinton are among some of her most popular impressions. She is a regular contributor across Radio 4 on programmes such as I’m Sorry I haven’t a Club and Just a Minute.

Alongside her work on screen and radio, Jan achieved rave reviews and broke box office records with her solo debut show 'Difficult Woman.’

In 2018 Jan Ravens toured with Rory Bremner. The Observer called Jan Ravens “The perfect mimic for our times".

Stage work includes The Intervention with The Comedians Theatre Company at the Edinburgh Festival directed by Braham Murray at The Royal Exchange Manchester. Theatre credits include The Children’s Hour, directed by Sarah Frankcom, for the Royal Exchange; RSC, Chichester and Birmingham Rep.