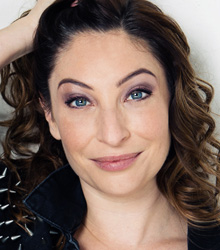 A classically trained singer, quadruple award winning act Jess Robinson is versatile in all styles, and began impersonating professionally when she played the title role of Little Voice, which she reprised on a national tour with Beverly Callard, Ray Quinn and Joe McGann.

In 2013, Jess developed her one-woman show which she performed at Freedom in Soho. This led to her producing and starring in her debut show, Jess Robinson: Mighty Voice, at The Edinburgh Festival in 2014. Since then Jess has returned to the Edinburgh Festival with a new show each year, picking up four awards and some amazing reviews along the way.

The voice of CBBC’s hit show – Horrible Histories, Jess’ voices multiple characters on an array of UK and US animations including; Dreamworks’ Noddy, Kate and Mim Mim, Bat Pat and Lucky Fred. You’ll hear her voice on various adverts for The Disney Channel, Cartoon Network, BBC4 and CBeebies among others. Jess has also voiced numerous video games such as Anno 1404, Risen, Book Of Unwritten Tales and Randy.

In 2017 Jess appeared on Britain’s Got Talent, making her way to the live finals.

By some way the best, most exciting impressionist we have.

How to book Jess Robinson for your event