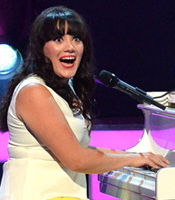 Called “the proverbial love child of Victoria Wood and Tim Minchin" by the press, Vikki Stone is an award winning musical comedian best known for her original comedy songs and appearances on the likes of The John Bishop Show (BBC1), The Now Show (Radio 4) and the BBC’s Ten Pieces which was screened in cinemas nationwide in 2015.

Her shows at Edinburgh’s Comedy Festival played to sell-out houses for three consecutive years, and were listed by The Independent as their Top Ten To See In Edinburgh, and as The Observer’s Top Five Edinburgh Acts. Her Edinburgh show 'Hot Mess' added extra shows due to demand.

Vikki has filmed a TED talk at CERN and has been commissioned to write a comedy choral piece with a world premiere at the Royal Albert Hall.

As an optional extra by special request, Vikki Stone can work with you to write a bespoke song, unique to your event.

Really very good stand-up... she delivers quite a punch - cleverly constructed stuff with some terrific one-liners, a great gift for smilingly handing you an unexpectedly awful image and smart little callbacks woven into not just the chat, but the songs too. She is a woman to watch.

How to book Vikki Stone for your event