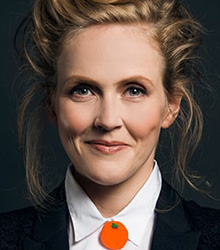 Pippa Evans first appeared at the Edinburgh Fringe in 2008 where she bagged a nomination for Best Newcomer for her debut show. A multi-talented and versatile performer, she has gone from strength to strength, performing regularly on BBC Radio 4 institution The Now Show as well as making guest appearances on hit TV shows such as Dave’s Alan Davies: As Yet Untitled and Comedy Central’s Drunk History.

She has also featured on BBC3’s sketch comedy show Live At The Electric and was one of the regular cast members on BBC2’s comedy improv series Fast and Loose. In 2017 Pippa performed to a packed out house on ITV’s variety series Tonight at the Palladium.

Following her Edinburgh Comedy Award nomination in 2008, 2010 saw Pippa unleash her alter-ego Loretta Maine, a sexy and psychotic American country and western singer-songwriter, for a full show of her own, Loretta Maine: I’m Not Drunk I Just Need To Talk To You.

Pippa enjoyed 3 Edinburgh Fringe Festivals, a five-night run at the Soho Theatre and her debut at the Melbourne Comedy Festival as Loretta Maine, before returning to Edinburgh as herself in 2013. This was brilliantly received by critics and audiences alike.

With There Are No Guilty Pleasures, the 2015 Leicester Comedy Festival Best Show nominee, Pippa enjoyed a month of packed houses at the Fringe, after making her debut at the prestigious Just For Laughs Comedy Festival in Montreal.

August 2016 saw Pippa return to the Fringe with new show Same Same But Different, securing her second nomination for the Amused Moose Comedy Award in the process. In 2017 Pippa took her latest creation Joy Provision! to the Edinburgh Fringe. She performed to packed houses throughout the month and gained a plethora of great reviews.

Pippa is also a core member of The Showstoppers, the Olivier award-winning group who improvise a new musical based on audience suggestions. Pippa has performed with The Showstoppers across the UK and the world, including West End residencies and a six part series for Radio 4.

Pippa is also a member of The Glenda J Collective, a four-woman improve group, who also performed a short but popular run at the Fringe in 2017. Pippa frequently guests at different improv nights across London and is a semi-regular cast member of The Comedy Store Players.

Pippa is co-founder of the Sunday Assembly, a monthly gathering that promotes community and learning in a non-religious environment. Having started with just one congregation in London, it is now a global movement and has been featured in The Guardian, The New York Times and on the BBC.

She has performed stand-up after dinner sets for Pension Scheme of the Year Awards at Royal Society of Arts, London; Prudential staff at Donnington Valley Hotel and Spa, Newbury; Women in IT Awards at Grosvenor House, London.

Pippa is able to write and perform a song tailored to your event, which is always a favourite with audiences.

The finest female character comic around.

Pippa Evans is probably one of the most talented performers at Edinburgh this year.

Thank you for recommending and facilitating our booking with Pippa. She went down absolutely brilliantly and I was very impressed with her professionalism and all the research and work she had done beforehand to prepare. If you could please also pass on my thanks to Pippa. Lots of staff are saying how good she was, and everyone is talking about her song! A few of my directors have also passed on their praise about her hosting – which is high praise indeed!

Thank you for hosting at our VIP Awards event. I greatly appreciated your professionalism. You good humour coupled with your extensive research went down exceptionally well with our staff, and the executive team and I have received a lot of feedback to that effect. Thank you again for your role in making our event such a success.

How to book Pippa Evans for your event