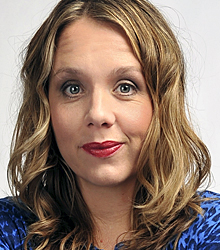 After numerous acting roles on TV shows such as Silk, Extras, Law Of The Playground, Rush Hour, Miranda and Life's Too Short, actress and comedian Kerry Godliman's stand up career blossomed after perfectly executed performances on The Michael McIntyre Roadshow and several notable stints on Live at the Apollo.

A major support role on Mickey Flanagan's arena tour further established Kerry’s reputation as one of the country's finest stand ups and she soon went on to create her own critically acclaimed Fringe show ‘Wonder Woman' in 2011.

However, like many stand-ups, Kerry's formative years were spent training, grafting and then establishing herself as a serious actor, which has already paid dividends many times over. Her co-star and creator of Derek, Ricky Gervais, described her as “honestly the best actor I've ever worked with”.

Kerry Godliman graduated from Rose Bruford College in 1997 and followed a path into drama school. But harbouring a passion for comedy Kerri took an evening class in stand-up at London's City Lit and didn't look back. Kerry made the final of the 2003 Babycham Funny Women competition.

Kerry was then given her own Radio 4 show, Kerry's List. The programme builds on the themes of her Edinburgh Fringe stand-up show Wonder Woman, namely, juggling the demands of being a parent, wife, circuit comedian and jobbing actor.

Between 2017-18, Kerry has starred in two series of the ITV sitcom Bad Move, alongside fellow comedians Jack Dee and Seann Walsh. And separately, from 2019, portrayed Lisa in three series of the Netflix black comedy, After Life, written by and co-starring Ricky Gervais.

Kerry was great, really funny and went down really well with the audience for her set. She was also a very good host for the awards and coped well when we had a non-appearance of one of the winners!! I wouldn't hesitate to recommend her for similar bookings.

How to book Kerry Godliman for your event