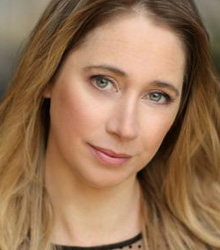 Tiff Stevenson is a stand up comedian, actor and writer. Known for her honest material and instantly likeable disposition, her thought provoking and engaging style have seen Tiff consistently play to packed audiences worldwide, from London to Sydney, Montreal, New York, Shanghai and beyond.

Her solo show Mad Man was one of the must-see performances at the Edinburgh Fringe Festival 2015, with five-star reviews from the Herald and The Daily Mirror. This follows on from her previous successes with Optimist, Uncomfortably Numb, Cavewoman, Dictators and Along Came a Spider. In 2015 The Times picked Tiff as one of their top 10 comics to watch at the Fringe. In 2016 she returned to Fringe again with her brand new show Seven.

On the Radio, Tiff has been a guest on Front Row, MacCaulay & Co with regular appearances on Comedy Club, 7 Day Saturday & Sunday with Al Murray, Breaking the News and The Good, the Bad and the Unexpected. Tiff also writes regularly for the Metro newspaper.

As an actor, Tiff’s credits include appearances in groundbreaking shows such as The Office, White Gold and a regular role on hit shows such as acclaimed BAFTA-winning People Just Do Nothing and E4’s Game Face.

It went great! ...had really good feedback about the event and Tiff was great... Tiff was really professional.

Had nothing but great feedback. Tiff was awesome!

How to book Tiff Stevenson for your event