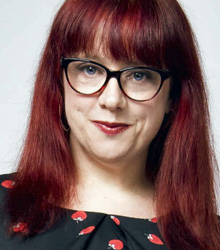 After a decade-long career in mental health and social care, Angela decided in 2008 to realise a long held ambition and give comedy a go. For a short time she was booking comedy acts in Brighton as an extracurricular activity in her evenings. There she became friends with Josh Widdicombe, James Acaster and Nick Helm – then taking their own first steps into comedy. Such was her unfounded fear of what they would think of her going from booker to comedian, that she would perform at open spots in any club around Brighton except her own, in order to get stage time without them seeing her.

Within a couple of years she had won the 2011 BBC New Comedy Award and became a finalist at the 2011 Latitude Festival New Act of the Year competition.

She didn't become a comedian until thirty-three, only learnt to swim when she was thirty-seven, didn't fall in love until thirty-eight and passed her driving test at thirty-nine. Why the hurry? She is un-pensioned, un-married, un-mortgaged and a fully paid-up member of the Peter Pan generation. People have stopped asking Angela Barnes what she's going to be when she grows up, and instead want to know when she is going to settle down.