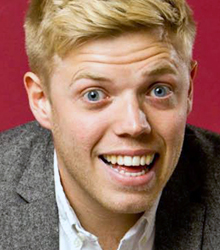 Consistently impressive performances in these competitions culminated with Rob finishing as a runner up in So You Think You're Funny, which earned him an invite to perform at comedy festivals in Australia. At this festival in Adelaide Rob was nominated for the best newcomer award in 2011.

He made his debut solo show at the Edinburgh Fringe Festival in 2012 with Rob Beckett's Summer Holiday. The tour ran until spring 2014 and saw him playing to sell out venues all over the UK with dates being added due to the phenomenal demand.

Since 2012, Rob Beckett has appeared on Live At The Apollo, Would I Lie To You, Mock The Week, Celebrity Juice as well as his role as resident comedian in the jungle each year on I'm A Celebrity Get Me Out Of Here Now! from 2012 until 2014. Since 2016, he has been a team captain on the Channel 4 panel show 8 Out of 10 Cats.

Rob is a massive Arsenal fan, is married, drives a Nissan Micra and is the proud owner of a 6 foot teddy bear! He also went to Coopers School in Chislehurst, Kent with fellow comedian Tom Allen.

It was amazing! I managed to keep Rob Beckett a secret from everyone and I’m so glad I did because the surprise huge. I chatted with people this morning and they’re still overwhelmed.  Rob was perfect. Thank you so much for all your work too, I really appreciate it.

How to book Rob Beckett for your event