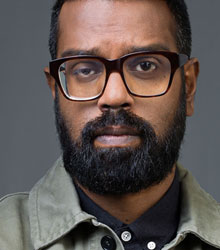 The last few years have been incredible for Romesh Ranganathan; now a household name, he is best known for his BAFTA and RTS Award-winning series The Misadventures Of Romesh Ranganathan, his weekly topical show Ranganation and his Sky One sitcom The Reluctant Landlord.

He’s travelled the globe with Rob Beckett in Rob & Romesh Vs, been a regular and host of A League Of Their Own and starred in the show that first brought Romesh and his mum to the public consciousness, the BAFTA nominated Asian Provocateur.

Best known for his deadpan and often self-deprecating comedy, Romesh Ranganathan first appeared on the comedy circuit in 2010, performing in venues across the UK. With cutting one liners, he quickly gained a following and became a finalist in a number of comedy competitions, including the Latitude New Act Final 2010 & So You Think You're Funny?

These achievements culminated in his debut appearance on BBC2’s ‘Mock The Week’, BBC1’s ‘Live At The Apollo’, ITV1’s ‘Sunday Night At The Palladium’, BBC3’s ‘Russell Howard’s Good News’, ‘Edinburgh Comedy Fest Live 2013’, a regular slot on Channel 4’s weekly topical show ‘Stand Up For The Week’, hosting two series of BBC Radio 4 Extra’s ‘Newsjack’ as well as appearances on BBC Radio 4’s ‘News Quiz’ and the long-running and beloved ‘The Now Show’.

2019 saw Romesh return to his stand-up roots with him heading back out on tour with his biggest tour to date, The Cynic’s Mixtape, which sold out theatres in record time across the UK, including 12 nights at the Eventim Apollo. He finished that year with a bang, joining Rob Beckett to host the prestigious Royal Variety Performance at the iconic London Palladium, entertaining the Royals and viewers at home with his signature dry wit.

In 2018, Romesh took on America with the launch of his own series Just Another Immigrant on Showtime. His time in America also saw him appear twice on James Corden’s Late Late Show and debut on The Late Show with Stephen Colbert. He returned to America at the start of 2020 with a four-night sell-out run at SoHo Playhouse in New York.

Amongst all of this, Romesh still found time to record his award-winning podcast Hip Hop Saved My Life which welcomed stars including Kano, Louis Theroux, Mark Ronson, DJ Premier, Clara Amfo, Little Simz and Jamie Redknapp. He also found the time to write an autobiography, Straight Outta Crawley: The Memoirs Of A Distinctly Average Human Being, which was a Sunday Times Bestseller and quickly followed up with his second book, As Good as It Gets: Life Lessons from a Reluctant Adult, which was published in 2021.

It’s non-stop for Romesh Ranganathan, one of the hardest working comedians in the game!

Now a household name and one of Britain’s most successful comedians, Romesh Ranganathan is the perfect entertainment for corporate and private events, whether it’s delivering a witty and razor sharp after dinner comedy set or hosting a company or trade association gala awards dinner.

Clients often ask about purchasing books for giveaways and delegate packs. Below you’ll find a selection of products by Romesh Ranganathan. Click the images to view on Amazon's website. For bulk orders, please speak with your Booking Agent.

How to book Romesh Ranganathan for your event