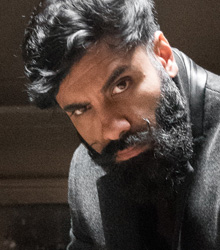 Paul Chowdhry is a regular on Channel 4′s late night topical comedy show Stand Up For The Week where he has been impressing viewers and audiences week-on-week with his unique take on international multiracial issues.

Seen by many as the UK's number one Asian comedian, with over three million YouTube hits, Paul Chowdhry has distinguished himself as one of the most talented and popular comedians to have recently emerged.

Inspired by comedians such as the late Richard Prior, George Carlin and Sam Kinison, Paul is one of the few comics with the ability and diversity to effortlessly straddle the urban and main stand-up circuits as an international headline act – with his highly charged dry observational humour tapping into the multicultural diversity of contemporary Britain.

One of the most sought after comics on the UK comedy circuit, Paul has recently embarked on a twenty-five date sell-out UK tour, including two sell-out nights at London's Indigo2. Paul's talents extends past the realms of stand-up and has also starred in numerous acting roles in high profile theatrical film releases including: Swinging With The Finkles alongside Martin Freeman and Jerry Stiller, Colour Me Kubrick with John Malkovich, Rogue Trader with Ewan McGregor and Anna Friel and It Was An Accident alongside Thandie Newton.

In addition to Stand Up For The Week, his varied TV appearances includes: BBC1′s weekly topical politics show This Week presented by Andrew Neil, Comedy Central At The Comedy Store, presenting MTV's Comedy Weekend, plus appearances on The World Stands Up and The All-New Comedy Store for Paramount Comedy Channel and USA's Comedy Central.

International acclaim - Paul Chowdhry has starred in 'The World Stands Up' and 'The All-New Comedy Store' for Paramount Comedy Channel and USA's Comedy Central. He became the first British act to perform at the Caribbean Comedy Festival in Trinidad to an audience of 30,000. He has also performed nine sell out shows at the NEC Birmingham. Paul was also the host of the AMA (Asian Music Awards) at the Hammersmith Palais.

He performed at The Panasonic Theatre in Toronto, Canada as a part of 'The World Comedy Clash' showcase. An established international act, he also performed tours of Hong Kong, Dubai, Abu Dhabi, Bahrain, Doha, Amsterdam, Germany, South Africa and headlined the International Indian Kings of Comedy tour. Paul's courageous search for the absurd in issues such as racism, terrorism and religious fundamentalism is funny around the world.

Paul Chowdhry is amongst the few comedians to perform at the 02 Centre, Wembley Arena and The Grosvenor House before Cherie Blair and Richard Attenborough. He was chosen by The Telegraph as a 'must do' show of the year.

Clients often ask about purchasing books for giveaways and delegate packs. Below you’ll find a selection of products by Paul Chowdhry. Click the images to view on Amazon's website. For bulk orders, please speak with your Booking Agent.

How to book Paul Chowdhry for your event