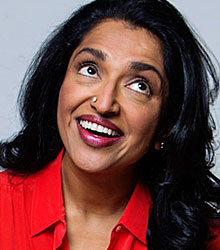 Born and raised in India, and with degrees from Delhi University, Oxford University, the University of Chicago, half a PHD, a successful career in investment banking and three children, Sindhu Vee decided it was time to make her parents proud and start a career in comedy.

Sindhu performed her first ever comedy show in 2012 at the Funny Women Award’s heats – making it to the semi-finals and then a year later, the finals. With nerves of steel and some might say a slight competitive streak, Sindhu has also competed at the 2013 Amused Moose Comedy Awards (quarter finalist), in 2016 she was a finalist in the Comedy Knights Fresh Comedian of the Year competition and the BBC New Comedy Awards.

In 2017, Sindhu was a runner-up in the Leicester New Comedian of the Year and New Act of the Year Awards and won the Comedy Award at the 2017 Eastern Eye: Arts, Culture & Theatre Awards
.
Following these hugely successful beginnings, it’s been a swift rise for Sindhu with invitations flying in to perform worldwide, from the US to India – where in 2014, Sindhu performed to sold out audiences in Delhi and featured in a television special, Rising Stars of Comedy on India’s premier English channel, NDTV.

In 2015 she was invited to join 5 Indian comics at Coimbatore’s Laughathon and was named in Shaadi-Etiyaadi’s (an Indian blog) among the top 18 comics in India.

Back on UK soil, Sindhu Vee is already a firm favourite on the comedy circuit securing gigs across the country including the Edinburgh Fringe Festival and sell-out nights at London’s coveted Museum of Comedy with her solo show The Girl From Sindhustan.

On radio Sindhu has appeared a host of shows for BBC including; Woman’s Hour 70th Birthday Party, It’s a Funny World and Preeya Kalidas’ weekly show Kupid Kalidas for which she is the voice of ‘Auntie G’. Sindhu is also the new host of BBC Radio 4’s Comedy of the Week podcast, and has her own BBC Radio 4 Comedy Special coming soon – Sindhustan.

How to book Sindhu Vee for your event