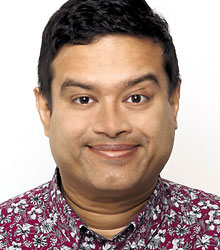 A trained medical doctor and qualified GP who is perhaps best known as the Sinnerman on the hugely popular ITV quiz show 'The Chase', Paul Sinha has been a comedian for a number of years.

As a club comedian, he has played every major comedy club in the UK, performed in eighteen other countries across the globe, and been three times nominated for Best Club Comedian at the Chortle Awards, winning in 2014. He has also performed in China, New Zealand, Singapore, the Middle East, South Africa, Netherlands and Germany.

He was educated at St George's, University of London. While at medical school, he developed a taste for the stage in St George's annual Revue and refined his comedy as editor of the medical school Newsletter.

Paul Sinha began performing stand-up while working as a junior doctor in hospitals in London and King's Lynn. His early material drew on his sexuality and ethnicity with a high pun concentration. In 1999 he reached the final of the Hackney Empire New Act of the Year where he was runner-up.

After several years of combining touring with his nascent medical career, Paul Sinha's breakthrough came with his second solo Edinburgh show, Saint or Sinha? which earned him widespread critical acclaim and an if.comeddie nomination in 2006.

Since then Paul has been in great demand, whether on TV shows such as Edinburgh and Beyond, World Stands up, Comedy Shuffle and Comedy Cuts, on Radio 4′s Loose Ends and the Now Show, or his numerous contributions to Radio 5 Live and Talksport, as well as having recorded for the late Shane Warne's Ashes podcasts.

Paul Sinha has appeared several times on BBC Radio 4, on shows including The News Quiz, The Now Show, Loose Ends , 28 Acts in 28 Minutes, Shappi Talk and Just A Minute. His keen interest in football and cricket has led to appearances on Radio 5 Live, most notably Fighting Talk.

He was diagnosed with Parkinson's disease in 2019 and often discussed the condition in his comedy performances.

As a qualified doctor and GP, Paul has always been a popular booking for medical and healthcare events but he’s also performed for the retail, legal, sports, financial, education and charity sectors.

Quizzing
Paul Sinha loves to quiz. It started early with a childhood of encyclopaedias and school quiz tournaments, moved onto a near addiction to pub quiz machines, and then in 2007, serendipitously, a minor mid-life crisis led him to start taking it all more seriously.

Paul is currently the sixth ranked quizzer in the UK, a member of the Gray Monks – current champions of the Quiz League of London, a regular on Radio 4’s venerable Round Britain Quiz, and of course one of the “Chasers” on the ITV hit quiz show The Chase.

Since The Sinnerman launched Paul onto an unsuspecting public in 2011, his attempts at wit and erratic quiz prowess have caused admiration, abuse, and desperate filler stories in the Daily Express.

As well as obsessively taking part in quizzes, Paul Sinha writes and hosts them. Please speak with your NMP Live booking agent to discuss him hosting your next quiz night.

Paul was a huge hit – very funny, well-pitched for the audience, and very accessible and he even stayed for drinks afterwards which everyone really appreciated. He made it a great night for everyone and we are all really pleased with the success of the event which was largely down to him.

Paul was great. Funny, personable and with time for everyone. We have had a lot of positive feedback regarding him as the host from people attending the awards.

Please can you pass on a sincere and heartfelt thank you to Paul Sinha for his performance at our recent KPMG event.There is a buzz about the network as a result of Paul’s story, honesty and comedy and the event is still very much a hot topic internally...

Clients often ask about purchasing books for giveaways and delegate packs. Below you’ll find a selection of products by Paul Sinha. Click the images to view on Amazon's website. For bulk orders, please speak with your Booking Agent.

How to book Paul Sinha for your event