Book The Magnets add to shortlist 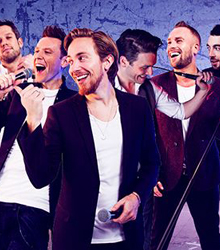 Book The Magnets
add to shortlist
About

Imagine... dancing to the best band you've heard in ages. On stage are six sharp‐suited men with infectious tunes, slick moves and a tight rhythm section. But something is different about this group. There are no instruments, no backing tracks, and yet the music goes on. Then you realise. All of this amazing sound is being made with voices alone... you have just imagined The Magnets.

The Magnets are Britain's most exciting vocal group since the 1960s. Combining harmony singing with beatbox drumming, they have taken a cappella music to a whole new audience, and created a sound to rival that of any band with instruments. In fact, The Magnets have the advantage over any conventional band. They can perform any time, anywhere there is space for six men to stand and sing. From street corner to arena, just add an audience and let the show begin.

From early beginnings busking on the streets of London, The Magnets turned professional on signing to the EMI label in 2000. Subsequently the group have toured the world, released three albums, and produced a series of hit a cappella theatre shows.

Career highlights include tours with Tom Jones, Lisa Stansfield, and Michael Ball, appearances on TV shows such as Parkinson, BBC Proms in the Park, and GMTV, and concerts at venues such as the Royal Albert Hall, Birmingham Symphony Hall, and for the Queen's Jubilee at Buckingham Palace. In demand for corporate and private events large and small, The Magnets have found themselves singing everywhere from official functions for world leaders to Elle Macpherson's living room, and for numerous charity events.

In their element live, a Magnets concert is a combination of musical sophistication, showmanship, and soul. With a superb repertoire of pop, soul, and rock hits, from The Beatles to The Jackson 5, and the band's own award winning songs, each show is tailored to the needs of the occasion and venue.

Making music a cappella enables the band to take an alternative look at music, and recent theatre shows have featured surprising versions of songs as diverse as Love Will Tear Us Apart by Joy Division, and Bon Jovi's Living On A Prayer. However, The Magnets are not too cool to party, and the songs are spiced with humour, dancing, audience participation, and of course Andy 'Lips' Frost's incredible vocal drum solo.

Glorious a cappella... these are top-class professional vocalists. The audience voted with their feet, but rather than walking were stamping with delight!

Clients often ask about purchasing books for giveaways and delegate packs. Below you’ll find a selection of products by The Magnets. Click the images to view on Amazon's website. For bulk orders, please speak with your Booking Agent.

How to book The Magnets for your event

Tags for The Magnets