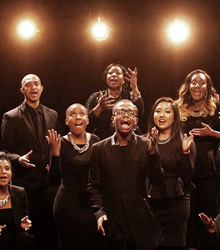 OUT OF MANY ONE VOICE ... ... ... ... and out of an assortment of churches, cultures and characters emerges THE LONDON COMMUNITY GOSPEL CHOIR.

In 1982 a dream and a vision came alive. Revd. Bazil Meade, with the help of Lawrence Johnson, Delroy Powell and John Francis made a mark in history pioneering the first concert gospel choir in the UK. LCGC nurtured over the next two decades more than 200 members from all areas of London and its suburbs.

Trying to fit LCGC into a neat slot is virtually impossible. They are adaptable, flexible and perform dynamic sounds creating rich harmonies whether they are a small or large group. LCGC is known for their up-tempo gospel flair, swing-beat, R'n'B, traditional and soulful arrangements, with their invigorating choreography and vocal gymnastics - LCGC is outstanding to watch!

LCGC have sung on the soundtrack for Walt Disney's "The Lion King", performed for Nelson Mandela during his famous visit to London, officiated at 'Mel B's (Spice Girls)' wedding, represented the British Council at international festivals in Zambia and Zimbabwe, opened at main stage Glastonbury and put gospel for the first time on the BBC Proms map.

LCGC have released 8 CD's, 3 singles and several videos. Their latest recording 'Live at the Abbey Road' was released in May 2003. This was our 21st anniversary concert, with special guests Paul Carrack, Matt Redman, Martin Smith (of Delirious), Sam Moore and Carleen Anderson

Controversial, Professional, Energetic, Inspiring and Spirit-filled!.. Whatever adjective you may choose to describe the sound and vision of the LC Gospel Choir, 'aint no stopping them now', they will continue to go where angels fear to tread.

How to book London Community Gospel Choir (LCGC) for your event

To book London Community Gospel Choir (LCGC), please submit an online enquiry, email bookings@nmp.co.uk or speak with one of our booking agents on +44 (0)1372 361 004.