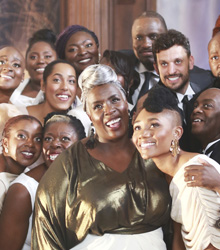 Book The Kingdom Choir
add to shortlist
About

The choir was founded in 1994 London by award-winning conductor Karen Gibson. The group of singers from in and around London draw from various Christian traditions and are dedicated to creating a sound that demonstrates the community they share through their warm energy and enthusiastic performance.

Prior to performing in front of nearly 2 billion people at the Royal Wedding, the largest audience The Kingdom Choir had performed to was just 200 people.

The Kingdom Choir’s first headline London show sold-out within a week of going on sale and their debut album Stand By Me was released in October and went straight into the UK Top 20 charts. They performed at the closing ceremony of the Invictus Games 2019 in Sydney, Australia.

How to book The Kingdom Choir for your event

Tags for The Kingdom Choir