The most famous bagpipe band in the world 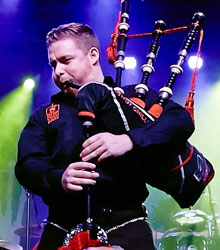 The most famous bagpipe band in the world, the Red Hot Chilli Pipers are bagpipes with attitude, drums with a Scottish accent and a show so hot it carries its own health warning.

A Celtic rock band from Scotland, the band’s achievements have reached incredible heights with their groundbreaking fusion of traditional Scottish music and rock/pop anthems which they proudly call ‘bagrock’. Formed in 2002, they became popular internationally in 2007 after winning the BBC talent show When Will I Be Famous? hosted by Graham Norton.

They have performed at private parties for Ewan McGregor, Sir Paul McCartney, Sir Alex Ferguson, Her Majesty the Queen and Sir Andy Murray. Whilst publicly, they have opened the main stage at T in the Park and performed for the BBC Proms in the Park in Hyde Park.

And if that’s not enough, they have a Gold disk for over 100,000 UK sales of their first album – ‘Bagrock to the Masses’, been twice-awarded ‘Best Live Act in Scotland’, Triple platinum album status for the third album and DVD – ‘Blast Live’ and a ‘Big Hearted Scotland’ nomination for their charity work worldwide.

Popular for private parties and grand corporate affairs, the Red Hot Chilli Pipers have never been more in demand for their infectious style of feel-good music which appeals right across the age range to people all over the world.

The band's line up features three highland bagpipers and traditional marching snare, backed by a five- to seven-piece band. The band's live show also features vocal performances and highland dancing. They have a pool of the very best musicians from Scotland and across the globe – many holding World Champion titles and all serious players with impressive credentials and qualifications.

Since their formation the Red Hot Chilli Pipers have combined guitars, keyboards, drums and their bagpipes to create 'bagrock' sound. The Red Hot Chilli Pipers perform a fusion of traditional pipe tunes and contemporary pieces. Notable covers performed have included We Will Rock You by Queen, Clocks by Coldplay and Smoke on the Water by Deep Purple as well as Chasing Cars by Snow Patrol, Don't Stop Believing by Journey.

How to book Red Hot Chilli Pipers for your event