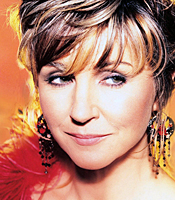 Lesley Garrett, CBE, is Britain's most popular soprano, regularly appearing in both opera and in concert, on television and CD; she has won both critical acclaim and the affection of many fans and music lovers.

As a recording artist, she has fourteen solo CDs to her credit: Soprano in Red received the Gramophone Award for 'Best-selling Classical Artist of the Year', Diva! A Soprano At The Movies, Prima Donna, Simple Gifts, Soprano in Red, Soprano in Hollywood, and I Will Wait for You all received silver discs and A Soprano Inspired and Lesley Garrett both achieved gold discs.

Lesley's operatic career included early engagements at the Wexford Festival, Buxton Festival Welsh National Opera, Opera North and Glyndebourne Festival Opera before joining English National Opera in 1984. During her time with ENO, Lesley starred in many productions and won critical acclaim for her portrayals of both comic and serious roles.

Lesley made her Royal Opera debut in their production of The Merry Widow in 1997. She returned to the Coliseum in the spring of 2001 for a revival of her acclaimed Rosina in Rossini's Barber of Seville, having first performed the role there in 1998.

Internationally Lesley Garrett has performed throughout Europe, the USA, Australia, Russia, Brazil, Japan, Malaysia, Taiwan and South Korea, where she sang Happy Birthday for Her Majesty Queen Elizabeth II in the presence of the Queen during her State visit to the country.

For Millennium Eve, Lesley sang opera and pop classics with Bryan Ferry, The Eurythmics and Mick Hucknall in the grounds of the Royal Observatory and National Maritime Museum, Greenwich. In 2000 her autobiography 'Notes from a Small Soprano' was published and during that year she appeared at the first-ever Classical Brit Awards and performed the very last Abide With Me at the 2000 FA Cup Final (prior to the closure of Wembley Stadium) in aid of the NSPCC. In 2003, Lesley joined the radio station, Classic FM as a weekly presenter.

In 2004, Lesley took part in the inauguration ceremony for Cunard's Queen Mary 2 before travelling to Australia for concerts with the West Australian Symphony Orchestra. She returned to Australia in 2005. Also in 2004 Lesley was invited to be one of the celebrity dancers on the first series of the BBC1 hit show Strictly Come Dancing, together with her professional dance partner, Anton Du Beke, she reached the semi-finals of the competition.

In 2005 Lesley was invited to be one of the judges of the BBC's Comic Relief Does Fame Academy and in May she both sang at and hosted the 2005 Classical Brit Awards, filmed at the Royal Albert Hall. In 2006 Lesley joined ITV's hit show Loose Women as a regular weekly guest and in the autumn she performed the role of the Mother Abbess in a new production at the London Palladium of The Sound of Music.

In 2007 Lesley presented a new series for BBC1 Christmas Voices. In 2011, she returned to The Sound of Music for the final two weeks of the production. Earlier that year, she co-presented a four part series for BBC1 celebrating the Royal Wedding and performed once again at the BBC Last Night of the Proms in Belfast.

Lesley Garrett was awarded a CBE in the 2002 New Year's Honours List for Services to Music and is a Fellow of the Royal Academy of Music.

I wanted to drop you a line on behalf of the whole Marketing Manchester team, to say what a joy it was to work with you at our Manchester Live! event at BAFTA House on Wednesday evening... Thank you for your thoughtful approach and choice of repertoire to suit the venue and audience profile. And I have to say, we couldn't have created a better connecting script, even if we'd written it ourselves! As ever, you were wonderful and thank you so much for a fantastic evening.

It was a truly memorable occasion and Lesley was just superb. It was an amazing performance and one which I and my guests will never forget. Lesley was absolutely wonderful afterwards too – she came into the dining room and sat and ate a pudding and enjoyed a glass of wine and then happily chatted to guests and posed for photographs. Lesley also performed a spontaneous rendition of 'Happy Birthday' which will probably never be sung so beautifully to me ever again. It was the icing on the cake!

Clients often ask about purchasing books for giveaways and delegate packs. Below you’ll find a selection of products by Lesley Garrett CBE. Click the images to view on Amazon's website. For bulk orders, please speak with your Booking Agent.

How to book Lesley Garrett CBE for your event