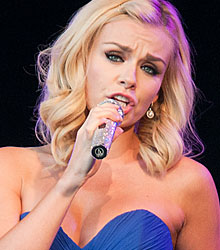 In 2017, Welsh superstar mezzo soprano Katherine Jenkins OBE was officially named Britain’s best-selling classical artist of the past 25 years according to the Ultimate Classic FM Chart. This record breaking achievement came only a year after celebrating 12 number one albums in 12 years since signing to Universal Classics at the tender age of 23.

Katherine Jenkins' story began, quite unusually for a classical singer, when she was offered a recording contract immediately after leaving college - a six-album deal with Universal Classics.

Her debut album 'Premiere' went straight to number one in the classical charts in April 2004 and stayed there for eight weeks, outselling operatic greats like Kiri te Kanawa, Lesley Garrett and Angela Gheorghiu.

During 2004, Katherine went on tour as a special guest with Hayley Westenra. In May she was the first singer ever to perform both at the FA Cup Final and the Powergen Challenge Cup Final (Rugby League) in the same year. Both events took place in the magnificent Millennium Stadium in Cardiff - fast becoming a 'home ground' for Katherine. This was closely followed by an appearance at the Classical Brits 2004 which was broadcast on ITV1.

With the release of her second album 'Second Nature' just seven months after her first ever recording, Katherine went one better. Not only did she become the first mezzo-soprano to break into the pop chart in the top 20, she also became the first artist to score two number ones in the classical chart in the same year and became the biggest selling classical artist in the UK (2004).

Clients often ask about purchasing books for giveaways and delegate packs. Below you’ll find a selection of products by Katherine Jenkins OBE. Click the images to view on Amazon's website. For bulk orders, please speak with your Booking Agent.

How to book Katherine Jenkins OBE for your event