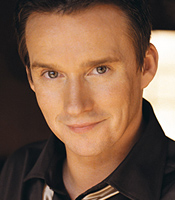 The story of Russell Watson is inspirational. It depicts the meteoric rise of a humble factory worker from Salford who was catapulted into international singing stardom. He has sold millions of records worldwide and has performed for some of the most influential people of our time including the King of Malaysia, The President of the United States, the Emperor of Japan, our very own Prime Minister, Prime Minister of Germany, various powerful Sultans, The Beckham's and even the late Pope John Paul II who requested a private audience with Russell at the Vatican in Rome.

After staging a recent concert at Windsor Castle in the presence of Prince Charles and Camilla Duchess of Cornwall, Prince Charles requested Russell Watson's services as an ambassador for his coveted charity The Princes Trust. Keeping it in the 'Royal' family, Russell has been invited to numerous functions hosted by Queen Elizabeth II including a recent visit to Buckingham Palace.

Russell's big break came in May 1999 when he was invited to Old Trafford to sing before Manchester United's Premiership-winning match. His performance of the World Cup anthem "Nessun Dorma" received a standing ovation. Inevitably this triggered a series of sports-related performances. He was invited to perform so often that one journalist was quoted as saying "there is only one person to have appeared more times at Wembley this year than David Beckham, and that is Russell Watson!". The sports theme has stayed with Russell and in 2002 he was invited to perform at the opening ceremony of the Commonwealth Games in front of a worldwide television audience of 1 billion people.

Russell Watson was signed by The Decca Music Group to a five-album deal and in September 2000, his debut recording The Voice was released to huge critical and public acclaim. This mix of repertoire along with Russell's majestic vocal performance delivered an immediate impact.

By October, it had climbed to No.5 in the UK pop charts and broke worldwide records by holding the No.1 position in the classical chart for a year, only to be knocked off by his follow up release, Encore. It broke further records by quickly reaching the No. 1 spot in the US, making Watson the first British male to simultaneously occupy the top of both the UK and the American charts. This multi million-seller went on to win two Classical Brit awards for Best Classical Album (voted for by the British public) and Best Classical Debut album.

Russell Watson's third album Reprise, released in 2002, went Platinum in the UK within two weeks, reaching No. 9 in the pop charts and No. 1 in the classical charts. In fact every UK release to this day by Russell has reached top ten status in the national UK album charts.

In 2006 Russell released The Ultimate Collection, a compilation of his greatest hits so far. With a debut at no. 2 in the national album charts, and a fifth number one in the Classical charts it really proved Russell is here to stay.

2007 saw Russell perform a sell out 22 date UK tour and the successful release of his 5th album which debuted at No 4 in the charts. His album People Get Ready, containing easy listening, rock and soul music standards, was released on 17 November 2008.

Clients often ask about purchasing books for giveaways and delegate packs. Below you’ll find a selection of products by Russell Watson. Click the images to view on Amazon's website. For bulk orders, please speak with your Booking Agent.

How to book Russell Watson for your event