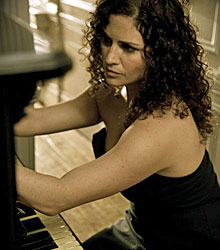 Natasha Panas has a rare natural gift for music. Since childhood, London-born Natasha was blessed with an astonishing ability to recreate upon the piano almost any song that caught her ear.

This talent has led her to develop one of the most extensive repertoires of any pianist in her field. Today, she regularly performs and entertains at some of the world's finest parties and events and has established a reputation as one of the UK's most versatile and respected singer-pianists.

Natasha has even been likened to a human jukebox for her capacity to play almost any song one might request. With a natural instinct for curating her repertoire to suit the specific clientele at every show, and a mesmerising ability to conjure a sing-along wherever she goes, it's no wonder her enthralled audience come back to book her for their events again and again.

Apart from performing in the private events market, Natasha Panas is also an accomplished songwriter, having worked with producers such as Felix Howard (Amy Winehouse) and Paul Simm (Sugarbabes). Her track Need To Feel Wanted was a Hed Kandi favourite when released on the label's much loved Beach House compilation.

She has frequently appeared on TV (Top of The Pops, CD:UK, This Morning, etc) playing and singing with different bands.

Natasha Panas can be booked in a number of line-up options dependent upon the event or client’s requirements. Her versatility as a singer and pianist allow her to cover a wide range of possibilities as a solo performer.

In addition, she loves to collaborate and perform alongside others, offering line-ups ranging from an acoustic-style duo right up to fronting a full on party band.

SOLO
Natasha can perform solo as a pianist (instrumental only) or singer-pianist. In both cases, her repertoire is broad-ranging and she is able to cater for a lively event just as easily as providing a beautiful background ambience.

DUO/TRIO/QUARTET
Natasha also performs with various different instrumentalists to from a duo, trio or quartet when a more upbeat mood is required.

FULL BAND
In addition to her unique skills as a pianist and singer-pianist, Natasha has an impressive and highly versatile voice that can traverse all genres, from blues to lounge and rock to pop.

She regularly works with a full band to perform covers songs for dancing. Natasha frequently offers this line up to clients who have fallen in love with her voice and wish to have a mixture of background piano music in the early part of their event followed by a band for dancing later in the evening.

I cannot tell you how many wonderful things were said about your performance. Your playing and singing through dinner was fantastic and when your band came on everyone was really blown away. You truly helped make the evening a memorable one.

Natasha is fantastic. Reliable and friendly – our guests always ask for her to play at birthdays, book launches and all types of events. Her style is lively without being too intrusive and she plays to suit the mood of the event.

Thanks so much for performing at our event, you played such fab tunes, all of which were greatly appreciated. I shall be passing on your details to clients and friends.

With an incredible ability to switch from Gershwin to David Bowie... she will inject any private party with sophistication. Natasha Panas is worth singing about.

How to book Natasha Panas for your event

One of the most gifted improvising pianists in the world

One of the most gifted improvising pianists in the world