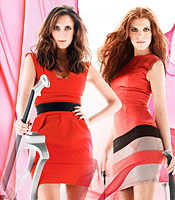 Book Escala
add to shortlist
About

Having met as friends in 2006, the original line-up of Escala rose to fame on primetime hit ITV show Britain's Got Talent in 2008, mesmerising the audience with their immense talent and unique style of music.

Today, Victoria, Stephanie, Helen and Honor perform a brilliant mixture of classical music with contemporary styles and this combination proved to be a big hit on Britain's Got Talent where they were voted by the public to go through to the final.

The four girls have been classically trained at the Guildhall School of Music, Royal Academy and Royal College of Music and have spent years honing their skills as musicians. Before they came together as eScala they already had an impressive line of work under their belts with Izzy having performed a solo performance at The Royal Albert Hall, Chantal, who was invited to Dubai, performed a solo viola performance for the launch of the new Baldessarini Boutique, while Natasya and Victoria have both been part of the War of the Worlds tour.

This unconventional quartet prove that classical music, once a niche genre, can truly reach out to mainstream audiences, taking bold steps to mix modern pop songs with traditional string instruments.

For each booking a bespoke performance model is designed specific to the client’s needs, and remarkably the girls electric instruments are completely remote from any floor wiring, allowing them the freedom to perform in a host of unique spaces and in varied choreographed staging presentations.

For special events, they have performed with orchestras, ribbon dancers, aerialists, pop or rock acts, and even have a fiery tango set playing acoustically with a spanish flamenco guitarist. Escala perform in a variety of different set-ups depending on the requirements of the event, the venue and the capacity of the audience, however these are the most common ones they perform:

CORPORATE & PRIVATE PERFORMANCES
Escala have performed at events around the world for some of the most prestigious brands and personalities. From a grand scale in an arena or concert hall, to an intimate cocktail party or gala dinner, they always deliver a memorable highlight to an evening.

MEET AND GREETS
If entertaining key VIPs and clients, Victoria, Stephanie, Helen and Honor are happy to meet & greet guests following a performance (within an agreed format) to ‘show off’ the association for your brand.

How to book Escala for your event