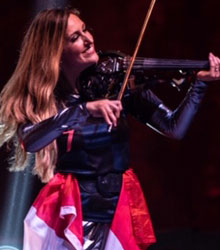 Book Bond
add to shortlist
About

At its launch, BOND was hailed in the press as ‘the Spice Girls of classical music’, and went onto turn the world of classical crossover music on its head, spawning many electric string groups inspired by its unique sound.

The members of BOND draw their inspiration from classical, latin, folk, jazz, rock, pop, electro, Indian and middle eastern styles. They have built a very active and loyal international fan base over the years and, since their debut, BOND have sold over 4 million albums worldwide, making BOND the best-selling string quartet of all time.

The musicians, educated to the highest standard at some of the world’s most celebrated music institutions (Royal Academy of Music, Royal College of Music, Guildhall and Trinity College of Music), are pure entertainment, serving up a genuinely genre-defying act willing to explore the joy of music regardless of the cultural hamstrings.

The quartet has made countless international TV appearances in the UK, America, Australia, Central America and Asia, including BBC, ITV, Channel 4, Sky, CNN, FOX News, BBC, ITV, RAI, ZDF, NBC, CBC… the list is endless. As well as appearing on major TV shows, BOND has hosted CNN’s the Music Room, performed at the MTV Awards in Asia and the USA and participated in televised performances at Radio City Music Hall in New York.

BOND has appeared in most of the world’s major newspapers and magazines and has travelled the globe several times over in sell-out tours. First violinist Tania Davis says, ‘performing with Pavarotti singing Caruso and playing the Sydney Opera House were beyond special for me. We also have the most amazing fans – we go to places like Mexico and now know loads of them by name!’.

Cellist Gay-Yee Westerhoff adds, ‘we have played in front of the magnificent Giza Pyramids several times, including helping Zaha Hadid celebrate one of her phenomenal buildings’. ‘We were so proud to make our debut at the Royal Albert Hall’, says violinist Eos, ‘and then there was Wall Street, when we were styled by Patricia Field [of Sex and The City fame] – we arrived in convertible Lincolns, stopping off and playing before ringing the closing bell.

Then it was straight off to play in Time Square!’. ‘Playing in Beijing, at the Olympics handover, alongside Jimmy Page, Leona Lewis and David Beckham, was amazing and four years later to perform with BOND at the Olympics closing ceremony in London was utterly awe-inspiring’, adds Elspeth Hanson.

How to book Bond for your event