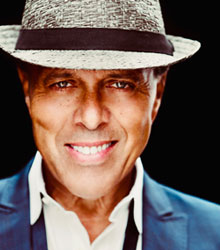 Platinum award-winning artist, Lance Ellington, is the resident voice on Strictly Come Dancing and one of the UK’s most prominent male vocalists. His regular appearances on the BBC’s globally successful prime time show have endeared him to millions of UK dance and music fans and his charismatic style and sultry tones have entertained more than 30 million people world wide.

Aside from being heard on numerous film and TV projects like the X Factor, Britain’s Got Talent and Grease is the Word, Lance also appeared as his father in the movie The Life and Death of Peter Sellers, alongside Geoffrey Rush and Charlize Theron. This inspired him to record his first two albums, Lessons In Love and There Comes a Time.

He has also been performing 'The Best of Bond' as lead vocalist with the renowned classical conductor, Carl Davis, alongside the Birmingham, Halle and Prague Symphony Orchestras. Lance celebrated Carl's 75th Birthday on the BBC's Live Radio programme 'Friday Night is Music Night' as one of the solo vocalists. In Spring 2012, Lance travelled to the Far East appearing as lead vocalist with the Malaysian Philarmonic Orchestra. On his return to the UK, Lance performed a concert version of Guys and Dolls at the Cadogan Hall with a wonderful West End cast and the Royal Philharmonic Orchestra.

BBC Strictly Come Dancing resident vocalist Lance Ellington takes you on a seamless journey of swing, romance and nostalgia with some of the most beautiful songs ever written, including the music of his father, legendary jazz band leader and ‘Goon Show’ personality, Ray Ellington and some of Lance’s original compositions.

His charismatic style and sultry tone combined with music from his live eight piece band make ‘Lance Ellington and his band’ a performance not to be missed.

The first time I heard Lance sing, I knew his velvet voice certainly made him a singer's singer - what a talent!

Lance's voice is in a class of its own

Lance has a wonderful voice and a smooth style

Clients often ask about purchasing books for giveaways and delegate packs. Below you’ll find a selection of products by Lance Ellington. Click the images to view on Amazon's website. For bulk orders, please speak with your Booking Agent.

How to book Lance Ellington for your event