Book The Overtones add to shortlist 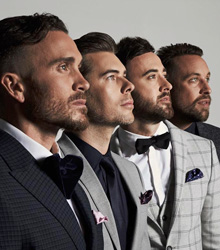 Book The Overtones
add to shortlist
About

After years of grinding out a living while chasing their dreams of becoming successful singers, The Overtones' perseverance was richly rewarded when they landed a recording deal with Warner Music Entertainment in the summer of 2010.

Released that same year, their debut album ‘Good Ol' Fashioned Love' was forecast to sell a respectable but hardly groundbreaking 20,000 copies. Almost two years later, the album exceeded 500,000 sales after peaking at number four on the album chart. 2012 saw them play to over 250,000 people at the Queen's Diamond Jubilee celebration and to another large audience at an Olympics show in Hyde Park.

In October 2012 they released their follow up album, Higher. Featuring a selection of their own self-written material, the album finds the boys pushing the boundaries of their music with a collection that blends a variety of contemporary pop influences into the uplifting, soulful sounds of the defining male vocal groups of the 50s and 60s.

It captures the essence of everything people loved about The Overtones the first time around, but it also finds the group brimming with confidence as they explore new territory.

Our boys are totally eargasmic!

We are so lovin' the sound!

You've got to love The Overtones.

Smooth, timeless vocals... They're taking off in style.

Poised to reach another level.

The performances are flawless.

Album of the Week, New!

Clients often ask about purchasing books for giveaways and delegate packs. Below you’ll find a selection of products by The Overtones. Click the images to view on Amazon's website. For bulk orders, please speak with your Booking Agent.

How to book The Overtones for your event

Tags for The Overtones