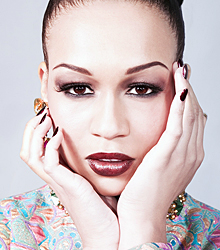 After coming runner-up on the seventh series of The X Factor, British singer-songwriter Rebecca Ferguson has not been short of success since her first appearance on the reality TV show.

Having co-written her record-breaking debut album Heaven in 2011, to commercial and critical success, the album sold 128,000 copies in its first week of release. It was certified two times platinum in the UK and platinum in Ireland.

She then released a further three follow-ups (Freedom, Lady Sings The Blues, Superwoman). Rebecca shows off her versatile style with ease and has proven herself to be a recording artist with a passion for her craft that is second to none, coming a long way from the shy twenty-something that audiences first saw on television all those years ago.

She has also been nominated for two prestigious MOBO awards, an MTV Music Award and Glamour’s Woman of the Year Award.

A single mother of two from Liverpool, Rebecca Ferguson set out on a mission to regain her confidence during The X Factor. She did far more than that. In what was one of the best auditions ever shown on the show, her story of dignified resignation – pregnant at 17, then again at 19, with no money and little hope – struck a chord with the nation.

It seemed that this was a voice destined never to be heard. Then she opened her mouth and her stunningly raw rendition of Sam Cooke's classic “A Change Is Gonna Come” set the bar on the show, oh, just a million miles higher….

Growing up in a chaotic one-parent household, life was far from diva-ish. With three brothers and two sisters, music was an escape for Rebecca. Although well behaved, she admits she didn't enjoy school; always wondering why she was there, when she knew her musical destiny. There wasn't any money to spare for Rebecca to follow her passion for singing, so at 14 she got a job in a clothes shop to pay for singing lessons. Performing Arts College followed, but then at 17, everything changed when she got pregnant with her first child Lillie May, followed by Karl two years later.

Rebecca Ferguson's stunning voice saw her ease through to the live stages of The X Factor competition, with judge Louis Walsh calling her “a class act” and she was soon installed as a hot favourite to win the competition. Her popularity grew week by week and eventually finished as runner-up following a memorable duet with Christina Aguilera.

It matters not that Rebecca was runner-up on the show – perhaps even beneficial, as it meant that the following year allowed this Liverpudlian world-class singer/songwriter to hone her writing skills and to channel that remarkable soul voice into a selection of songs that went on to establish her as the voice of her generation, and a global superstar.

Continuing to flourish as a confident songwriter and stunning live performer, embarking on countless tours across the UK, Europe and US, this working-class girl from Liverpool has no plans on stopping anytime soon.

In May 2020, Rebecca Ferguson released a new single entitled Nothing Left But Family, and featured global music legend Nile Rodgers.

Clients often ask about purchasing books for giveaways and delegate packs. Below you’ll find a selection of products by Rebecca Ferguson. Click the images to view on Amazon's website. For bulk orders, please speak with your Booking Agent.

How to book Rebecca Ferguson for your event