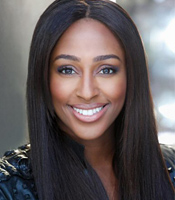 Singing since the age of 5 and performing live by the time she was 9 years old, vocal powerhouse Alexandra Burke - who has sold more than four million records worldwide - has a signature soulful sound that was crafted throughout a childhood filled with music.

Melissa Cecelia Ewen Bell, Burke's mother, known to many as the 'last leading lady' of hit group Soul II Soul, took her to perform every weekend wherever they could find a live band. The British star's amazing voice and vocal range developed quickly, capturing the heart of legendary recording artist Stevie Wonder, who wanted to sign her to Motown at age 12. From that point forward, offers for a record deal kept coming in yet education remained the top priority. It wasn’t until age 16 that Burke first auditioned for UK’s "The X Factor," but as fate would have Alexandra was not chosen to compete. Turning a setback into an opportunity, she took time to perfect her skill and came back to win the shows title in 2008.

Alexandra Burke can belt out a ballad with the best of them, as shown in her beautiful duet with Beyonce' during "The X Factor" finale. Fresh off this amazing win, the three-time chart-topper debuted a stirring cover of "Hallelujah" which sold 105,000 copies on its first day of release. She went on to drop the UK No. 1 album, Overcome, featuring collaborations with hip-hop superstar Flo Rida, R&B hit-maker Ne-Yo and RedOne.

This hit combination from Burke's debut album produced the No. 1 airplay single "All Night Long" with superstar Pitbull, plus the dance floor slaying collaboration featuring Super Producer Erick Morillo, "Elephant". Selling out a national tour, Burke's unique vocal style captured audiences everywhere. That energy continued in 2012 with her sophomore album, Heartbreak on Hold, a soulful yet hypnotic combination that brings energy in abundance once the tempo shifts up a gear.

Alexandra Burke is also passionate about giving back and has contributed her singing talent to support charities such as Samuel L. Jackson's Shooting Stars in London. Additionally she has launched Save the Children UK's "No Child Born to Die" campaign, climbed the Inca Trek in Peru for Breast Cancer Care and supports Juvenile Diabetes-related charities in the UK. To support Children In Need's POP Goes The Musical in 2012, Alexandra also performed an impressive rendition of Eponin's 'On My Own' in the epic musical Les Miserables at London's Queen's Theatre.

How to book Alexandra Burke for your event