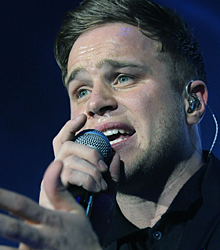 Olly Murs shot to fame following his remarkable performances on series 6 of The X Factor, where the likeable cheeky chap from Essex wowed the judges performing Stevie Wonder's 'Superstition' and prompting Simon Cowell to proclaim "that's the easiest 'yes' I have ever given".

Having sung his way through to the final of the 2009 show, and despite eventually finishing as runner up to Joe McElderry, Olly has been in huge demand ever since, and in 2010 he signed a joint record deal between Epic Records and Syco Music. A star was born, and there has been no turning back for Olly Murs, who is now regarded as one of the UK's most successful recording artists.

Prior to gaining fame with The X Factor, Olly Murs worked as a recruitment consultant and performed as part of a covers band called the Small Town Blaggers with a friend. However, it was in 2008 when he travelled to Australia, backpacking alone along the east coast for three months, that he decided, upon his return, to audition for The X Factor again, having tried twice unsuccessfully in the past.

Olly's debut single that he co-wrote, titled "Please Don't Let Me Go", was released in August 2010 and went straight to number one in the UK charts. Then "Heart Skips a Beat" was released and became his second number-one hit, before his first single from the follow up album In Case You Didn't Know, "Dance with Me Tonight", became his third to reach number one. To date, Olly Murs has sold over 10 million records worldwide.

Having moved rapidly on from his X Factor days, Olly Murrs has become a regular on our TV screens and spent a week in 2011 co-presenting the highly popular Chris Moyles Breakfast Show on BBC Radio 1. Then, later that year, it was announced he would return to The X Factor to co-present spin-off show The Xtra Factor with Caroline Flack. His autobiography, Happy Days, was published in 2012.

Olly continues to go from strength to strength artistically and, coupled with his down-to-earth nature, is always popular on both the corporate entertainment and private party scene.

How to book Olly Murs for your event