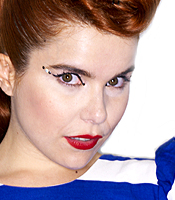 Paloma Faith released her debut album Do You Want the Truth or Something Beautiful? in 2009, featuring the top twenty singles "Stone Cold Sober" and "New York". The album reached number nine in the United Kingdom, and was later certified double-platinum in the country.

In 2012, Paloma released her second studio album, Fall to Grace, which reached number two in the UK and has since been certified double-platinum. The album produced her first top ten single, "Picking Up the Pieces", and the top twenty cover version of INXS' "Never Tear Us Apart", featured in the 2012 John Lewis advertising campaign.

Paloma Faith's third album, A Perfect Contradiction was released in 2014 and has become her most successful album to date. The album included the top ten singles "Can't Rely on You" and "Only Love Can Hurt Like This". The latter became Faith's highest-charting single in the UK.

Paloma Faith has received three Brit Award nominations, including British Female Solo Artist and Best British Album, and won one. She has also made feature film appearances in the 2007 remake St Trinian's, The Imaginarium of Doctor Parnassus and Dread.

A down-to-earth and much-loved personality, Paloma Faith is the perfect headliner for any corporate or private event.

Clients often ask about purchasing books for giveaways and delegate packs. Below you’ll find a selection of products by Paloma Faith. Click the images to view on Amazon's website. For bulk orders, please speak with your Booking Agent.

How to book Paloma Faith for your event