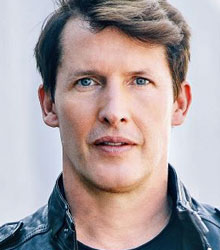 From birth in a military hospital in Tidworth, to Harrow School, to Aerospace Manufacturing Engineering, to the Royal Military Academy Sandhurst, to The Household Cavalry, to Kosovo, to Buckingham Palace, to a recording studio in Los Angeles. How did James get from there to here?

James Blunt's family have served in one kind of army or another since 995A.D. A long line of warriors. Savages really. Not a musical bone in any one of their bodies. The only music he heard growing up was "Happy Birthday" and "Silent Night". His father considered all music, even classical, to be unnecessary noise.

Although James was not one to rock the family boat, he didn't really think he was going to join the army -- it sort of crept up on him. Aged fourteen he just held the teenage conviction that he would have an interesting life -- maybe that's why he picked the guitar? Then again, maybe if he hadn't, he would have tripped over it.

He went to University and studied Aerospace Manufacturing Engineering and Sociology, spending most lectures asleep on the floor at the back. In much the same way, he ended up in the army. In essence, one day he was sleeping off a hangover at the back of a sociology lecture hall and the next thing he knew he was in Kosovo with a gun and a guitar strapped to the side of a tank. To break up the super attenuated monotony, James would sometimes stroll through Serb villages wearing an East German cap singing, "All we are saying is give peace a chance". "We were peace-keepers at that point," he explained, shrugging helplessly.

So how did the music get into him, you might ask? Well if you were sent to boarding school aged seven, studied Engineering by mistake ("I thought we were going to fly planes, but we just pulled metals apart - the brochure was very misleading."), joined the army by default, guarded The Queen, buried The Queen Mother and pranced around London like a tit for Japanese tourists to photograph, what you're going to want to do very much after that, besides getting stoned and laid, is put your gun down, pick up a guitar and make an album in America with Linda Perry.

He went to California in September, 2003, to record his album, and discovered that being a slightly scruffy English boy in Los Angeles could be very pleasant. Staying at the home of an actress, he spent his days recording with Rothrock, and his nights...well... researching LA's club scene. "With my naïve background, it was like stepping into a devil's cauldron," he says, in happy reminiscence. He recorded the painfully poignant track "Goodbye, My Lover" in the actresses' bathroom, where she kept an old piano.

His current favourite listening is Cat Power and Lou Reed's "Transformer" album, and "Back to Bedlam" has a similarly enigmatic quality. He won't explain what most of the songs are about, though he does admit that the deceptively bubbly "So Long, Jimmy" was inspired by Messrs Hendrix and Morrison. As for the rest, he says only, "You can get away with murder in a song".

How to book James Blunt for your event