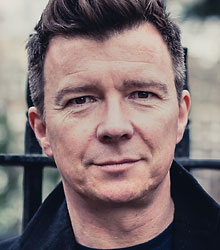 Rick Astley gained worldwide recognition in the 1980s, with multiple chart hits including his signature number one song Never Gonna Give You Up, plus Together Forever and Whenever You Need Somebody. After taking a hiatus which lasted several years, he returned to the music in the 2000s with a new contemporary vibe and more hit songs.

He became a musician after leaving school, as the drummer for soul band FBI. Three years later, Rick rose to fame through his relationship with PWL and renown production trio Stock Aitken Waterman; releasing the 1987 album Whenever You Need Somebody, which sold 15.2 million copies worldwide

Such was the sheer vocal talent of Rick Astley as a 21 year-old in 1987, and shocked by the powerful, mature soulful tone of his voice, Rick’s debut single Never Gonna Give You Up rocketed to the top of the UK singles charts within two weeks of its release.

The rest of the world soon followed suit, with Never Gonna Give You Up reaching Number 1 in 25 other countries including most of Europe, Japan, United States, Australia, and winning the 1988 Brit Award for Best British Single.

In the UK, Rick Astley was in the Top 40 charts every week for the first six months of his career.

The following two years saw him continue to dominate the charts around the globe. In 1988, he followed-up his debut album with Hold Me In Your Arms. The lead single, She Wants to Dance with Me, was Astley's first single that he wrote himself, and it became a worldwide top 10 hit.

In 1991, Rick Astley left Stock Aitken Waterman’s mainstream PWL record label and moved his musical direction away from dance-pop and towards soul. His first single Cry for Help from the new album, Free, was Astley's last single to reach the top 10 in either the US or UK.

He took a break from the music scene between 1994-200 before returning to the music industry in 2000, and released the single Sleeping and the album Keep It Turned On in 2001. Four years later, he released his covers album Portrait. By the time of his brief retirement, Rick Astley had sold approximately 40 million records worldwide.

Rick became an Internet phenomenon in 2007 when the music video for Never Gonna Give You Up became integral to the Rickrolling meme, and his performance career was revitalised by the meme's popularity.

He released a studio album Beautiful Life in 2018, followed by his greatest hits album, The Best of Me, in 2019.

His most memorable song, Never Gonna Give You Up, reached 1 billion views in July 2021, becoming the fourth 1980s song to reach this milestone — behind Billie Jean by Michael Jackson, Take On Me by A-ha and Sweet Child o' Mine by Guns N' Roses.

Rick and the band were absolutely fantastic, He put on a wonderful show and was so great to work with. Thanks for your help!

Clients often ask about purchasing books for giveaways and delegate packs. Below you’ll find a selection of products by Rick Astley. Click the images to view on Amazon's website. For bulk orders, please speak with your Booking Agent.

How to book Rick Astley for your event